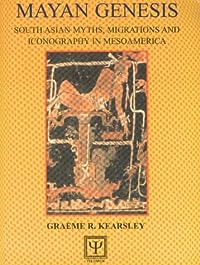 The prime theme of this work is a comparison of the iconography of the remarkable Mayan civilisation of central and south America, with that of India. It goes on to delineate the similarities between the mythologies of the Mayan people and those of the Mediterranean, China and Japan, Polynesia and ancient Egypt, amongst others. These similarities cannot be labelled coincidental. Did these mythologies erupt spontaneously from the collective unconscious of mankind, or is the more prosaic explanation to be found in the study of oceanic trading routes and sea-borne migrations? Presents a convincing and deeply-researched case that the mythology and iconography of Mesoamerica were widely and deeply influenced by those of India -- and the Ganges Delta in particular.… (more)