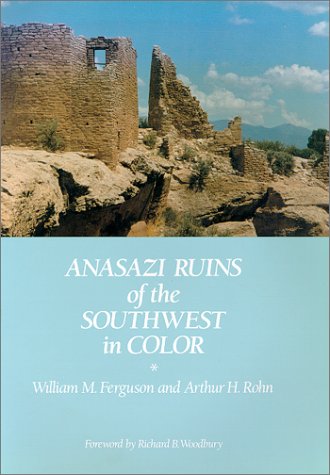 Anasazi Ruins of the Southwest

Other authorsRichard B. Woodbury (Foreword)

The Anasazi Indians of the Southwest represent 2,500 years of cultural continuity, from the early Basket Makers of 700BC to their modern descendants, the Pueblo Indians. The pueblos and cliff dwellings they built during their halcyon days between 1100 and 1500AD are the most spectacular ruins north of Mexico. In this book, all of the significant and accessible Anasazi ruins are photographed and described in detail. Special attention is paid to the magnificent sites of Mesa Verde, Chaco Canyon, Canyon de Chelly, and Kayenta. Also included are illustrations of rock art and examples of the delicate jewellery and beautiful ceramics that have survived.

Anasazi ruins of the Southwest in color by William M. Ferguson

New light on Chaco Canyon by David Grant Noble
People of Chaco : a canyon and its culture by Kendrick Frazier
Anasazi Ancient People of the Rock by David Muench
Anasazi America : seventeen centuries on the road from center place by David E. Stuart
Those who came before : southwestern archeology in the National Park System : featuring photographs from the George A. Grant Collection and a portfolio by David Muench by Robert Hill Lister
15 more
Ancient ruins of the Southwest : an archaeological guide by David Grant Noble
Ancient peoples of the American Southwest by Stephen Plog
Puebloan Ruins of the Southwest by Arthur H. Rohn
Emil W. Haury's Prehistory of the American Southwest by Emil W. Haury
Prehistoric Indians : their cultures, ruins, artifacts, and rock art by F. A. Barnes
Canyon Country: Prehistoric Rock Art by Fran Barnes
The ancient Southwest : Chaco Canyon, Bandelier, and Mesa Verde by David E. Stuart
The Chaco meridian : centers of political power in the ancient Southwest by Stephen H. Lekson
In search of the old ones : exploring the Anasazi world of the Southwest by David Roberts
Rock art of the American Indian. by Campbell Grant, 1909-
The rock art of Utah; a study from the Donald Scott Collection, Peabody Museum, Harvard University. by Polly. Schaafsma
A Field guide to rock art symbols of the greater Southwest by Alex Patterson
Maria, the potter of San Ildefonso by Alice Lee Marriott, 1910-
Indian rock art of the Southwest by Polly Schaafsma
House of rain : tracking a vanished civilization across the American Southwest by Craig Childs
Fewer