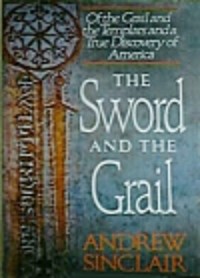 The Sword and the Grail: Of the Grail and the Templars and a True Discovery of America

Based on stunning new archaeological evidence, both in the UK and the USA, The Sword and the Grail details the part played by the Order of the Knights of the Templar - here proved to be the true antecedents of the Freemansons - in the discovery of America. As they fled the authorities who wished to destroyed them, some of the outlawed Templars carried their treasure to St Clair Castle, where the knights' relics are still buried. The tomb of their St Clair Grand Master, with the Grail carved on his stone, lies in Rosslyn, the core chapel of the Masonic movement. With the help of the sea skills and wealth of the Templars, the St Clair Grand Master, tried to found a new Jerusalem in the New World, landing with 300 colonists, first in what is now Nova Scotia and then in New England, more than 90 years before Columbus.… (more)

LibraryThing member MiaCulpa
Hmmm, The Sword and the Grail appears to be an attempt at alternative history, where the author posits that an ancestor, Prince Henry St Clair of Orkney, travelled to North America long before Columbus. The usual suspects make an appearance; The Knights Templar, the Masons and Rosslyn Chapel,
Show More
amongst others, and a lot of circumstantial evidence at best is deemed fact.
Show Less

The Knights Templar in the New World : how Henry Sinclair brought the Grail to Acadia by William F. Mann
Bloodline of the Holy Grail: The Hidden Lineage of Jesus Revealed by Laurence Gardner
Templars in America: From the Crusades to the New World by Tim Wallace-Murphy
The Hiram Key: Pharaohs, Freemasons and the Discovery of the Secret Scrolls of Jesus by Christopher Knight
Holy Blood, Holy Grail: The Secret History of Christ & The Shocking Legacy of the Grail by Michael Baigent
8 more
The stone puzzle of Rosslyn Chapel : the truth behind its Templar and Masonic secrets by Filip Coppens
The Lost Treasure of the Knights Templar: Solving the Oak Island Mystery by Steven Sora
The lost colony of the Templars : Verrazano's secret mission to America by Steven Sora
The Templars and the Ark of the Covenant : the discovery of the treasure of Solomon by Graham Phillips
Pirates and the lost Templar fleet : the secret naval war between the Knights Templar and the Vatican by David Hatcher Childress, 1957-
The Templar meridians : the secret mapping of the New World by William F. Mann
The Sign and the Seal: The Quest for the Lost Ark of the Covenant by Graham Hancock
Uriel's Machine: Uncovering the Secrets of Stonehenge, Noah's Flood and the Dawn of Civilization by Christopher Knight
Fewer