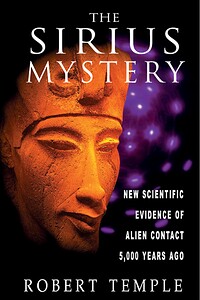 Convincing evidence that the Egyptian, Sumerian, and Dogon civilizations were founded by aliens from the Sirius star system who are now ready to return * Updated with 140 pages of new scientific evidence that solidifies the hypothesis that the KGB, CIA, and NASA attempted to suppress * An awe-inspiring work of research that calls for a profound reappraisal of our role in the universe * Over 10,000 copies sold in its first two months of release in Britain Publication of The Sirius Mystery in 1976 set the world abuzz with talk of an extraterrestrial origin to human civilization and triggered a 15-year persecution campaign against Robert Temple by the KGB, CIA, NASA, and other government agencies. Undaunted, however, Temple is back, with 140 pages of new scientific evidence that makes his hypothesis more compelling than ever. Many authors have speculated on the subject of extraterrestrial contact, but never before has such detailed evidence been presented. Temple applies his in-depth knowledge of ancient history, mythology, Pythagorean physics, chaos theory, and Greek, to a close examination of the measurements of the Great Pyramid of Giza, which was built to align directly with the star Sirius. He concludes that the alien civilization of Sirius and our own civilization are part of the same harmonic system, and are destined to function and resonate together. His findings warrant a profound reappraisal of our role in the universe.… (more)

LibraryThing member millsge
I had a lot of fun with this book. It's great to suspend disbelief and imagine that there really is a civilization out there. Aside from this, the value of works like this is that they bring out many things for which we have no answer. Academia needs to address itself to the Dogon and not simply wave their mythology off - vacuums have a way of being filled up.… (more)
1 more
LibraryThing member rajaratnam
Very difficult to accept; yet, the writer seems to be well accepted, and this book has been favourably reviewed. A seeker of knowledge cannot close his mind in these circumstances. Certainly challenging, but nor persuasive. How could it?
Fewer