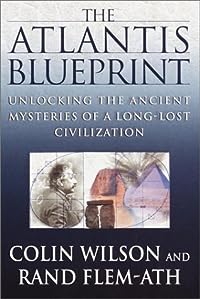 The Atlantis Blueprint: Unlocking the Ancient Mysteries of a Long-Lost Civilization

"The Great Pyramid. Stonehenge. Machu Picchu. For centuries, these and other sacred sites have inspired wonder among those who ponder their origins. Conventional science tells us they were constructed by local peoples working with the primitive tools of a fledgling civilization. But these megaliths nonetheless continue to attract pilgrims, scholars, and adventurers drawn by the possibility that their true spiritual and technological secrets remain hidden. Who could have built these elaborate monuments? How did they do it? And what were their incomprehensible efforts and sacrifices designed to accomplish?" "Colin Wilson and Canadian researcher Rand Flem-Ath join forces to share evidence of a fiercely intelligent society dating back as much as 100,000 years - one that sailed the oceans of the world, building monuments to preserve and communicate its remarkable wisdom. The Atlantis Blueprint is their term for a sophisticated network of connections between these sacred sites that they trace to Atlantis: a sophisticated maritime society that charted the globe from its home base in Antarctica ... until it was obliterated by the devastating global changes it anticipated but could not escape."--BOOK JACKET.… (more)

The Atlantis Blueprint: Unlocking the Ancient Mysteries of a Long-Lost Civilization by Colin Wilson (Paperback)

Heaven's mirror : quest for the lost civilization by Graham Hancock
Fingerprints Of The Gods: The Evidence of Earth's Lost Civilization by Graham Hancock
The Message of the Sphinx: A Quest for the Hidden Legacy of Mankind by Graham Hancock
The lost continent of Mu by James Churchward, 1852-1936
Atlantis of the West: The Case For Britain's Drowned Megalithic Civilization by Paul Dunbavin
17 more
The Giza Power Plant : Technologies of Ancient Egypt by Christopher Dunn
Atlantis, The Antediluvian World by Ignatius Donnelly
The Hiram Key: Pharaohs, Freemasons and the Discovery of the Secret Scrolls of Jesus by Christopher Knight
Uriel's Machine: Uncovering the Secrets of Stonehenge, Noah's Flood and the Dawn of Civilization by Christopher Knight
Maps of the ancient sea kings; evidence of advanced civilization in the ice age. by Charles H. Hapgood
Edgar Cayce on Atlantis. by Edgar Evans Cayce
Civilization one : the world is not as you thought it was by Christopher Knight, 1950-
Voyages of the Pyramid Builders: The True Origins of the Pyramids from Lost Egypt to Ancient America by Robert M. Schoch
The path of the Pole by Charles H. Hapgood
Before the Pharaohs: Egypt's Mysterious Prehistory by Edward F. Malkowski
The children of Mu, by James Churchward, 1852-1936
The Egypt Code by Robert Bauval
Lost cities of Atlantis, ancient Europe & the Mediterranean by David Hatcher Childress, 1957-
The sacred symbols of Mu by James Churchward, 1852-1936
The Sign and the Seal: The Quest for the Lost Ark of the Covenant by Graham Hancock
The Sirius Mystery: New Scientific Evidence of Alien Contact 5,000 Years Ago by Robert Temple
When the gods came down : the catastrophic roots of religion revealed by Alan F. Alford, 1961-
Fewer