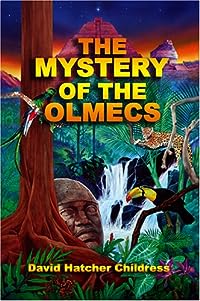 The Mystery Of The Olmecs

Lost Cities author Childress takes us deep into Mexico and Central America in search of the mysterious Olmecs, North America's early, advanced civilization. The Olmecs, now sometimes called Proto-Mayans, were not acknowledged to have existed as a civilization until an international archeological meeting in Mexico City in 1942. Now, the Olmecs are slowly being recognized as the Mother Culture of Mesoamerica, having invented writing, the ball game and the "Mayan" Calendar. But who were the Olmecs? Where did they come from? What happened to them? How sophisticated was their culture? How far back in time did it go? Why are many Olmec statues and figurines seemingly of foreign peoples such as Africans, Europeans and Chinese? Is there a link with Atlantis? In this heavily illustrated book, join Childress in search of the lost cities of the Olmecs! Chapters include: The Mystery of the Origin of the Olmecs; The Mystery of the Olmec Destruction; The Mystery of Quizuo; The Mystery of Transoceanic Trade; The Mystery of Cranial Deformation; The Mystery of Olmec Writing; more. Heavily illustrated, includes a color photo section.… (more)

The Mystery Of The Olmecs by David Hatcher Childress (Paperback)

Civilization one : the world is not as you thought it was by Christopher Knight, 1950-
The Egypt Code by Robert Bauval
Lost cities of North and Central America by David Hatcher Childress
The Cygnus mystery : unlocking the ancient secret of life's origins in the cosmos by Andrew Collins, 1957-
When time began by Zecharia Sitchin
17 more
Advanced Civilizations of Prehistoric America: The Lost Kingdoms of the Adena, Hopewell, Mississippians, and Anasazi by Frank Joseph
Sacred Symbols of the Dogon: The Key to Advanced Science in the Ancient Egyptian Hieroglyphs by Laird Scranton
Beneath the pyramids : Egypt's greatest secret uncovered by Andrew Collins, 1957-
Voyages of the Pyramid Builders: The True Origins of the Pyramids from Lost Egypt to Ancient America by Robert M. Schoch
The secret of the Incas : myth, astronomy, and the war against time by William Sullivan
The Hidden History of the Human Race (The Condensed Edition of Forbidden Archeology) by Richard L. Thompson
The enigma of cranial deformation : elongated skulls of the ancients by David Hatcher Childress, 1957-
Lost cities & ancient mysteries of the Southwest by David Hatcher Childress
The Atlantis Blueprint: Unlocking the Ancient Mysteries of a Long-Lost Civilization by Colin Wilson
Oedipus and Akhnaton: myth and history. by Immanuel Velikovsky, 1895-1979
The Science of the Dogon: Decoding the African Mystery Tradition by Laird Scranton
The Hiram Key: Pharaohs, Freemasons and the Discovery of the Secret Scrolls of Jesus by Christopher Knight
Uriel's Machine: Uncovering the Secrets of Stonehenge, Noah's Flood and the Dawn of Civilization by Christopher Knight
The God-Kings and the Titans; The New World Ascendancy in Ancient Times by James R. Bailey
Heaven's mirror : quest for the lost civilization by Graham Hancock
The Sphinx mystery : the forgotten origins of the sanctuary of Anubis by Robert K. G. Temple
Eden in the East : the drowned continent of Southeast Asia by Stephen Oppenheimer
Fewer