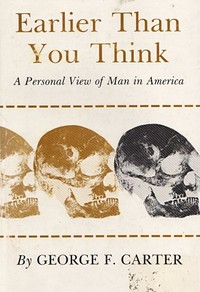 Earlier Than You Think: A Personal View of Man in America

Our knowledge of the hundred-thousand-years of human prehistory in the Americas has grown in spite of false starts, disciplinary straitjackets, and occasional personal attacks of those who have challenged prevailing notions. George F. Carter has for forty years been at the forefront of the controversy over the age of American antiquity. Here he tells the dual story of that controversy and the fascinating unraveling of the record of human presence in the Americas. Events and a new generation of scientists are now proving that Carter's daring estimates of antiquity may after all have understated the time since humans first entered the Americas. This book is written for the inquiring reader rather than the technician. Yet archeologists, anthropologists, geographers, geologists, and historians of science too will find stimulation and illumination in its pages. This fresh examination of the archeological evidence and one scientist's search for it--the story of science in action--proves to be a very human story.… (more)

Earlier Than You Think: A Personal View of Man in America by George F. Carter (Hardcover)