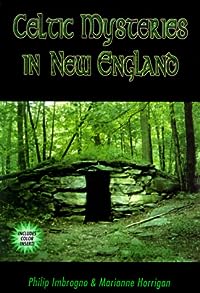 Are you ready to solve a mystery? One that disproves accepted archeology and history? Then you need to get Celtic Mysteries in New England by Philip Imbrogno and Marianne Horrigan. You see, there are over sixty-five mysterious small buildings throughout New England. Archeologists dismiss them as root cellars from colonial times. But if they are just root cellars, why are there no records of them being made by the colonists? Why is it that in one record a colonist - who found one already made and on his property - was told by a priest to avoid it? Why is it that many are aligned to certain stars that are associated with the ancient Druids? Why do some have intricate carvings on the walls? In order to answer these and many more questions, the authors start on a journey of discovery, and take you along on a wild ride that threatens to shake the very foundations of history! You will go along with them as they discover factual evidence of European explorers visiting the Americas nearly 1,000 years before Columbus. You will learn how the Druids came over and built these constructions as part of their religion. In Europe, such constructions are known to appear along lines of energy and power. So are these. You will discover how they are frequently the center for the appearance of odd lights and UFOs. Scientific evidence shows them to be centered on weird, magnetic field anomalies. If you are ready to discover the Celtic past of the Americas, you need to get this book. It will also intrigue and thrill archeologists, paranormalists, and people who just want to know the truth.… (more)

The Mystery Of The Olmecs by David Hatcher Childress
The Cygnus mystery : unlocking the ancient secret of life's origins in the cosmos by Andrew Collins, 1957-
Before the Pharaohs: Egypt's Mysterious Prehistory by Edward F. Malkowski
Signs in the Sky: Prophecies for the birth of a New Age by Adrian Gilbert
How the Irish saved civilization : the untold story of Ireland's heroic role from the fall of Rome to the rise of medieval Europe by Thomas Cahill
26 more
The Egypt Code by Robert Bauval
Civilization one : the world is not as you thought it was by Christopher Knight, 1950-
Early Christian Ireland by Máire De Paor
Heaven's mirror : quest for the lost civilization by Graham Hancock
When the gods came down : the catastrophic roots of religion revealed by Alan F. Alford, 1961-
The Road Wet, the Wind Close: Celtic Ireland by James Charles Roy
Secrets of the Lost Races: New Discoveries of Advanced Technology in Ancient Civilizations by Rene Noorbergen
The mystic dawn : Celtic Europe by Fergus Fleming
Voyages of the Pyramid Builders: The True Origins of the Pyramids from Lost Egypt to Ancient America by Robert M. Schoch
Beyond Stonehenge by Gerald S. Hawkins
The Mummies of Urumchi by E. J. W. Barber
The Magdalene legacy : The Jesus and Mary bloodline conspiracy, revelations beyond The Da Vinci code by Laurence Gardner
The end of Eden : the comet that changed civilization by Graham Phillips
The Atlantis Blueprint: Unlocking the Ancient Mysteries of a Long-Lost Civilization by Colin Wilson
Secret maps of the ancient world by Charlotte Harris Rees
The Silbury treasure : the great goddess rediscovered by Michael Dames
In quest of lost worlds by Byron Khun de Prorok, 1896-
A history of pagan Europe by Prudence Jones
Technology of the Gods: The Incredible Sciences of the Ancients by David Hatcher Childress
The Druids by Peter Berresford Ellis
The Hiram Key: Pharaohs, Freemasons and the Discovery of the Secret Scrolls of Jesus by Christopher Knight
Uriel's Machine: Uncovering the Secrets of Stonehenge, Noah's Flood and the Dawn of Civilization by Christopher Knight
Voyage to Atlantis : a firsthand account of the scientific expedition to solve the riddle of the ages by James W. Mavor
The lost continent of Mu by James Churchward, 1852-1936
Lost cities of Atlantis, ancient Europe & the Mediterranean by David Hatcher Childress, 1957-
The Templars and the Ark of the Covenant : the discovery of the treasure of Solomon by Graham Phillips
Fewer