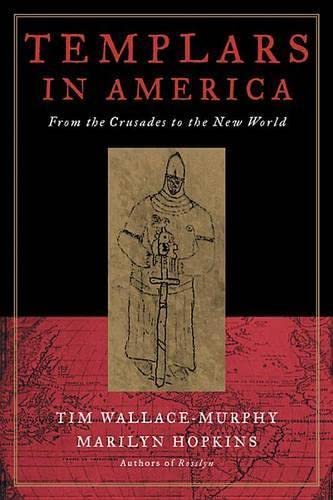 Templars in America: From the Crusades to the New World

Templars in America explodes the myth that Columbus was the first European to discover the Americas. Using archival and archaeological sources, Tim Wallace-Murphy and Marilyn Hopkins reveal the Venetian connection between the Knights Templar and pre-Columbian America and prove the continuous history of such exploration from the time of ancient Egypt, Greece, and Rome, through the Viking explorations. Told in fascinating detail, this story takes as many twists and turns as a historical mystery novel. Templars in America takes readers through the many possible early explorations of America, which set the stage for the real mystery: the tale of how various dealings between Venice and Normandy resulted in the Templars coming to America. Two leading European Templar families, nearly 100 years before Columbus, combined forces to create a new commonwealth in America. This is the story of Henry St. Clair of the Orkney Islands, then part of Normandy, and Carlo Zeno, a Venetian trader. These early explorers made peaceful and mutually beneficial contact with the Canadian Mikmaq people. Although the voyage had little immediate political or commercial impact, it acts as a signpost to a centuries-long process that culminates in the beliefs and traditions of the Templars and Freemasonry, shaping the thinking of the founding fathers of the United States and the American Constitution. Templars in America is a wild ride through the golden age of exploration to the founding of the United States of America.… (more)

The lost colony of the Templars : Verrazano's secret mission to America by Steven Sora
The Lost Treasure of the Knights Templar: Solving the Oak Island Mystery by Steven Sora
The Knights Templar in the New World : how Henry Sinclair brought the Grail to Acadia by William F. Mann
The Templar meridians : the secret mapping of the New World by William F. Mann
The Sword and the Grail: Of the Grail and the Templars and a True Discovery of America by Andrew Sinclair
5 more
Pirates and the lost Templar fleet : the secret naval war between the Knights Templar and the Vatican by David Hatcher Childress, 1957-
The Hiram Key: Pharaohs, Freemasons and the Discovery of the Secret Scrolls of Jesus by Christopher Knight
Uriel's machine : the ancient origins of science by Christopher Knight, 1950-
Rosslyn, guardian of the secrets of the Holy Grail by Tim Wallace-Murphy
The stone puzzle of Rosslyn Chapel : the truth behind its Templar and Masonic secrets by Filip Coppens
Fewer