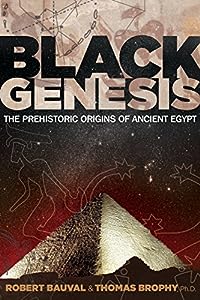 Relegated to the realm of archaeological heresy, despite a wealth of hard scientific evidence, the theory that an advanced civilization of black Africans settled in the Sahara long before Pharaonic Egypt existed has been dismissed and even condemned by conventional Egyptologists, archaeologists, and the Egyptian government. Uncovering compelling new evidence, Egyptologist Robert Bauval and astrophysicist Thomas Brophy present the anthropological, climatological, archaeological, geological, and genetic research supporting this hugely debated theory of the black African origin of Egyptian civilization. Building upon extensive studies from the past four decades and their own archaeoastronomical and hieroglyphic research, the authors show how the early black culture known as the Cattle People not only domesticated cattle but also had a sophisticated grasp of astronomy; created plentiful rock art at Gilf Kebir and Gebel Uwainat; had trade routes to the Mediterranean coast, central Africa, and the Sinai; held spiritual and occult ceremonies; and constructed a stone calendar circle and megaliths at the ceremonial site of Nabta Playa reminiscent of Stonehenge, yet much older. Revealing these "Star People" as the true founders of ancient Egyptian civilization, this book completely rewrites the history of world civilization, placing black Africa back in its rightful place at the center of mankind's origins.… (more)

Beneath the pyramids : Egypt's greatest secret uncovered by Andrew Collins, 1957-
The Science of the Dogon: Decoding the African Mystery Tradition by Laird Scranton
Lost technologies of ancient Egypt : advanced engineering in the temples of the pharaohs by Christopher Dunn, 1946-
The Sphinx mystery : the forgotten origins of the sanctuary of Anubis by Robert K. G. Temple
Forgotten civilization : the role of solar outbursts in our past and future by Robert M. Schoch
7 more
Sacred Symbols of the Dogon: The Key to Advanced Science in the Ancient Egyptian Hieroglyphs by Laird Scranton
Africa and the discovery of America by Leo Wiener
The Message of the Sphinx: A Quest for the Hidden Legacy of Mankind by Graham Hancock
Fingerprints Of The Gods: The Evidence of Earth's Lost Civilization by Graham Hancock
The Lost Civilizations of the Stone Age by Richard Rudgley
The Egypt Code by Robert Bauval
They Came Before Columbus: The African Presence in Ancient America by Ivan Van Sertima
Fewer