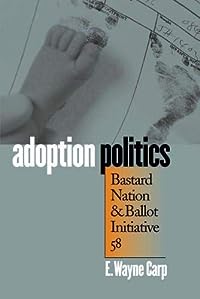 The passage of Measure 58 in Oregon in 1998 restored the legal right of adopted adults to request their original birth certificates. This book reveals the efforts of the grassroots organization, Bastard Nation to pass this milestone initiative. It follows the campaign from its inceptions, addressing essential ethical questions raised by all sides of this complex issue.

The passage of Measure 58 in Oregon in 1998 was a milestone in adoption reform. For the first time in U.S. history a grassroots initiative restored the legal right of adopted adults to request and receive their original birth certificates. Within a day after the law went into effect, nearly 2,400 adoptees had applied for these previously sealed records, elevating their right to know over a birth mother's right to privacy. E. Wayne Carp, a nationally respected authority on adoption history, now reveals the efforts of the radical adoptee rights organization Bastard Nation to pass this milestone initiative. He has written an intimate history of a passionately proposed and opposed initiative that has the potential to revolutionize the adoption reform movement nationwide. Carp follows the campaign from its inception through the hard-fought signature drives of proponents Helen Hill and Shea Grimm to the electoral campaign and ensuing court battles. The opposition was formidable: government officials, adoption agencies, news media, the ACLU, religious organizations, and ad-hoc citizen political groups. Using correspondence and his own candid interviews with all the key players, Carp shows how both sides mobilized their constituencies and formed their strategies. In describing challenges to Measure 58's constitutionality, Carp reveals legal arguments that were never publicized by the Oregon media and remained unknown to the American public until now--issues centering on privacy rights that are crucial to understanding both sides of the controversy and the hazards of initiative politics. As Carp shows, Measure 58 was important because it framed the issue of adoption reform in terms of civil rights and equal protection of the law rather than in terms of psychological needs or medical necessity. The resulting law now gives adult adoptees access to birth certificates but it also allows birth mothers to indicate whether or not they wish to be contacted. Carp not only chronicles a milestone initiative and a model piece of legislation for other states to emulate, he also proposes a sensible way to cut the Gordian Knot that bedevils adoption reform today.… (more)