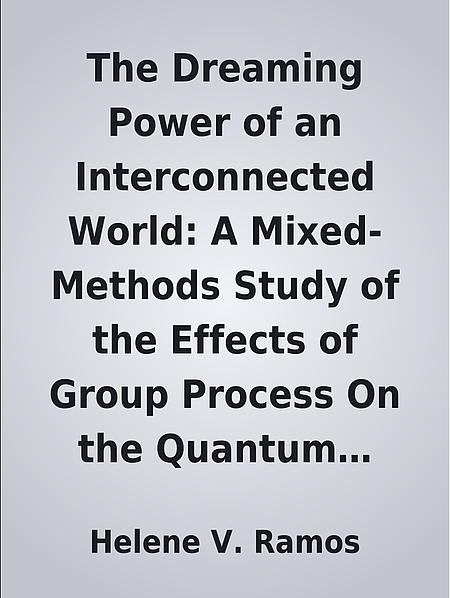 The Dreaming Power of an Interconnected World: A Mixed-Methods Study of the Effects of Group Process On the Quantum Field

Abstract
Research such as I have undertaken in this study of process in group fields is a step in two directions: first, in identifying whether there is a significant effect processes have upon the interpersonal field that Processwork refers to as the dreaming or quantum field; and secondly, in describing how that effect might be transmitted. Is there something in the process structure itself, or the facilitation method, that provokes a response? Do interactions between polarities pave the way for change? Might level changes from consensus reality to dreamland, and then essence, create state-like shifts that inform the groups? Does change take place within the group, or within individuals compromising the group; or are the individuals, the group and the larger field actually a nested whole of interrelated parts that organically communicates with and equilibrates itself as part of a fluid process? To begin to answer these questions, this mixed-method pilot study was designed and implemented to measure six group processes consisting of from six-twelve participants over a period of eight months in 2016. Its instruments are both quantitative (a random number generator or RNG) and qualitative (a subjective questionnaire and video analysis). The participants and facilitators in each of these processes were students at the Processwork Institute in Portland, Oregon and were supervised by senior instructors. Analysis of the data showed that in 66% of the processes, quantum coherence of greater than 2 standard deviations was measured and correlated with the highest positive subjective participant response. Several key elements of process structure such as sorting, facilitator teamwork, and unfolding disturbing background elements were also associated with positive correlation to quantum structuring. Since this first study was small and localized, it would be important to investigate larger group processes such as those arising during Worldwork, which involves hundreds of participants, and to extend measurements of the quantum field to include results from an expanded geographic range. This could be undertaken through collaboration with existing groups around the globe who continually monitor the quantum field through RNG measurements.