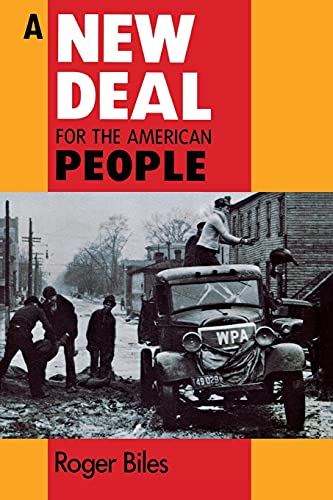 A new deal for the American people

When Franklin D. Roosevelt promised "a new deal for the American people," he gave hope to millions of Americans impoverished by the Great Depression. The Roosevelt administration's relief programs, implemented in a period of crisis characterized by the "Black Friday" stock market crash, widespread bank failures, and massive unemployment, marked the turning point in the making of modern America. Yet in spite of extensive aid provided on federal and state levels, the enormity of the economic problems throughout the country left much of the president's pledge unfulfilled. In this interpretive overview, Roger Biles discusses the factors contributing to the Great Depression and analyzes the federal government's emerging role in public welfare. Focusing on various segments of society, he assesses New Deal programs in terms of their impact on the lives of the American people, including the working class, women, African Americans, and urban dwellers. While drawing on scholarship of the past twenty years, he offers fresh insights into the social effects of Roosevelt's policies and stimulates new thinking on the question of whether the reforms preserved the foundations of American federalism or represented a second American revolution. In conclusion Biles weighs the New Deal's successes and failures, both of which he finds to be part of the same story, "a story that can only be understood with an appreciation for the context of the Depression years." A New Deal for the American People explores that context with sensitivity. This clearly written and highly readable study will engage both specialists and general readers interested in a balanced account of one of the most important programs of twentieth-century America, Roosevelt's New Deal.… (more)