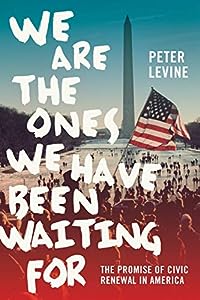 We Are the Ones We Have Been Waiting For: The Promise of Civic Renewal in America

"In September 2011, two leading civic engagement advocacy organizations headed, respectively, by Robert Putnam and Peter Levine released a joint report showing that a region's level of civic engagement was a strong predictor of its ability to recover from the Great Recession. This finding confirms what advocates of civic engagement have long hypothesized: that strengthening the networks between government and civil society and increasing citizen participation results in better government and better community outcomes. However, citizens concerned about the economic crisis need more than just deliberation or community organizing alone to achieve these outcomes. What they need, according to Peter Levine, is a movement devoted to civic renewal. Deliberative democracy-the idea that true democratic legitimacy derives from open, inclusive discussion and dialogue rather than simple voting-has become an extremely influential concept in the last two decades. In We Are the Ones We Have Been Waiting For, Peter Levine contends that effective deliberative democracy depends upon effective community advocacy. Deliberation, he shows, is most valuable when talk and debate are integrated into a community's everyday life. To illustrate how it works, Levine draws lessons from both community organizing and developmental psychology, and uses examples of successful efforts from communities across America as well as fledgling democracies in Africa and Eastern Europe. By engaging in this type of civic work, American citizens can meaningfully contribute to civic renewal, which, in turn, will address serious social problems that cannot be fixed in any other way"--… (more)

What Can a Citizen Do? by Dave Eggers
The Artist's Library: A Field Guide (Books in Action) by Erinn Batykefer