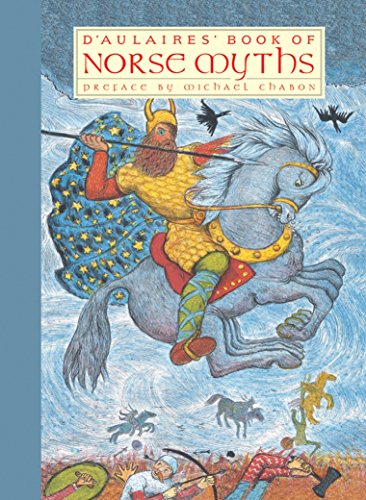 by Ingri and Edgar Parin D'Aulaire

A collection of Norse myths describing the exploits of the Aesir gods and goddesses, beginning with the creation of the world and ending with the day of reckoning. The companion to D'Aulaires' Book of Greek Myths, a treasured part of so many children's libraries, has returned to print after more than twenty years. The Caldecott medal winning D'Aulaires once again captivate their young audience with this beautifully illustrated introduction to Norse legends, telling stories of Odin the all father, Thor the thunder god and the theft of his hammer, Loki the mischievous god of the Jotun Race, and Ragnarokk, the destiny of the gods. Children meet Bragi, the god of poetry, and the famous Valkyrie maidens protecting Odin's Valhalla, among other gods, goddesses, heroes, and giants. Textured illustrations throughout depict the wondrous other world of Norse folklore and its fantastical northern landscape. Includes color illustrations throughout.… (more)

LibraryThing member richardderus
Well-loved books from my past

Ingri and Edgar Parin d'Aulaire were a married couple of Euro-origin, he Swiss and she Norwegian, who came to the US in the 1920s to pursue fame and fortune. Edgar was an illustrator for books, magazines, and the like, while Ingri painted rich guys' portraits. Came the Depression, oh dearie me...everything got harder...so the two collaborated on writing and illustrating kids' books together. For forty-plus years, the couple turned out beautiful, beautiful books.

This book, published in 1967, was a gift from my dad to me. I haven't got a lot of fond memories of my parents, and oddly most of them center around books in one shape or another. This is no exception. Dad read the book to me, even though by 1967 I was reading on my own, and we both loved the experience. He's a hambone and a half, my dad, funny and quick and full of wordplay. This book launched him on trajectories of mythmashing that, had I known then what I know now, I'd've written down or memorized or tape-recorded or something. He was abso-bloody-lutely riotous doing Odin as a doddering old fuffertut and Thor as a lisping f*gg*t (my sides are already hurting remembering the way that made me laugh...still does...) and the Valkyries as whining misery-guts.

The last time we spoke on the phone, before deafness and vascular dementia made it pointless to speak at all, I reminded Dad of this book. He laughed like he had when he was 40. He lit up as he did the voices again. It was a good last conversation to have with him, and it's all down to being a great big kid as he always was, and appreciating his kidliness left me feeling a lot less angry for his adult failings.

So this book holds my special and dear gratitude for being a bridge to a man I never loved, but always felt impatient with and annoyed by and hurt by. Books are magic, and myths are real, and don't ever, ever, ever forget that.… (more)
20 more
LibraryThing member mwittkids
This is a beautifully illustrated introduction to Norse myths
LibraryThing member countdowntoblastoff
A perfect book.

This is the kind of book children stumble upon in libraries and then obsessively devour for weeks. The myths are exciting and easily understandable, and the D'Aulaire's rough and colorful illustrations carve themselves indelibly into the memory. If you and/or your children have never seen this book, do yourselves a favor and get acquainted.… (more)
LibraryThing member lauraejensen
A stunning introduction to Norse Mythology. Classic and indispensable. Tellings of Odin, Thor, Bragi the god of poetry. The wondrous fantastical world of maidens, elves, gnomes, heroes, gods, goddesses and giants. A captivating, fantastic book with amazing illustrations. Will inspire children from the first sentence.
LibraryThing member anncampbell
A depiction of how the norse word was created and its eventual destruction. It reflects Scandinavian culture and geography. Very different then the familiar Greek mythology. The Norse gods do not interact much with humans much. It definitely reflects Scandinavian culture, geography, and its climate. The Norse world is one of cold, ice, and snow and these stories reflect that.… (more)
LibraryThing member annied1
This is an amazing collection of stories that show us the myths of the Norse people. I loved the artwork that beautifully illustrates the magical myths and brings the imagination to life. Would be great to use in the classroom for teaching mythology or even about the many different believes that different cultures have.
LibraryThing member timspalding
I adored the book as a child and revere it now. Although I ended up in Classics for graduate school, D'Aulaires Greek myths never caught me the way his Norse myths did.
LibraryThing member kkcrossley
Myths of the Viking. Fearsome beasts to fight and mighty gods to tangle with. Won Caldecott.
LibraryThing member caitlinbennison
Like the Book of Greek myths, this is a collection of myths retold and re-illustrated. With a "reader's companion," this book has a lot of information for readers looking to explore Norse myths.
LibraryThing member bkwurm
I am a huge fan of the d'Aulaire mythology collections. My kids and I love their collection of Greek myths, and have read through them more than once. The Norse myths are by nature a little harsher and a little colder, but I think they inspired more questions and discussion between my daughters and myself than the Greek myths did--always a good thing!

The d'Aulaire retelling of the Norse myths is clear, kid-friendly and just the right length to keep their attention, but it does all of this without losing the underlying feeling and meaning behind these often harsh and bloody histories. The illustrations are wonderful, and complement the stories perfectly. They myths can be read individually, or in order like a novel, to tell the story of the Norse pantheon from its inception to its demise at Ragnarokk.

There is so much reference to Norse myth in our culture and our literature, it really gives kids (and let's be honest, adults as well) a head start to have some familiarity with the stories and the history. This book has sparked plenty of interesting discussion, and I know we'll end up reading and enjoying it again and again over the years.… (more)
LibraryThing member E_Richard_Hansen
Norse mythology does not always seem the most kid friendly topic. You won't find lessons about sharing here. However, for a child who loves fantasy, a child who broods a bit, a child who does not always get on with others, this can be a pivotal read. This is one of the most important works from my childhood, and the d'Aulaire's illustrations are very raw, very wild and visceral.… (more)
LibraryThing member vadnama
D'Aulaire's "Norse Gods and Giants" is an excellent book for a child. It is a simplified retelling of the stories and adventures of the Norse pantheon. All of the gods are here: Odin, Thor, Loki, Heimdall, Balder, Freya, and all the rest. Along with the descriptions and anecdotes of the gods and goddesses are stories about the creation of the earth, the evil jotuns, and Ragnorrak (the end the world). All of the stories explain earthly phenomena, such as planting, writing, death, fertility, war, and love.… (more)
LibraryThing member kyleburley
When I was a kid, one of my favourite books to check out of the library was "D'Aulaires' Book of Greek Myths", but until recently I had never had the opportunity to read their book of Norse mythology. Happy to report it was worth the wait.
The whole fascinating pantheon of Norse Gods is vividly brought to life by the many colourul lithographs, from sly Loki, to austere Odin to an amusingly fierce rendition of Thor. The stories maintain the darkness and violence of the original myths, but are told in a simple, matter-of-fact prose style that renders them appropriate for younger readers. A series of tales relating Thors adventures among the Frost-Giants (or "Jotuns")are particularly amusing.
This edition also includes an introduction by Pulitzer Prize winning author Michael Chabon that helps give some background on the D'Aulaires and their achievement.
I recommend this book highly, as an introduction to the rich world of Norse mythology or simply as an entertaining read for imaginitive children.… (more)
LibraryThing member SebastianHagelstein
The illustrations in this book are detailed and colorful and I think are a great portrayal of the creatures and gods of Norse mythology. They accompany the thirty myths and descriptions of some of the Norse gods.

The nine Norse worlds and their locations are shown in a map on the front endpaper. With a reader's companion, or glossary and explanation of names, at the end.… (more)
LibraryThing member katieloucks
I love this one and the Greek one. so good.
LibraryThing member AlissaT
This book was a collection of several Norse myths and legends. As with most mythology stories, D'Aulaires Book of Norse Myth's told the exciting tales of the Norse gods and goddesses, particularly Odin, Thor, and Loki. It also included many stories of famous Norse heroes, including the viking Ragnar. Suitable for children ages 5-9, this book is exciting and engages children in the myths and legends of old.… (more)
LibraryThing member mrsdanaalbasha
The Norse myths are some of the greatest stories of all time. Weird monsters, thoroughly human gods, elves and sprites and gnomes, with grim giants nursing ancient grudges lurking behind—the mysterious and entrancing world of Norse myth comes alive in these pages thanks to the spellbinding storytelling and spectacular pictures of the incomparable d'Aulairse. In this classic book, the art of the Caldecott Award—winning authors of d'Aulaires' Book of Greek Myths, a longtime favorite of children and parent, reaches one of its pinnacles. It offers a way into a world of fantasy and struggle and charm that has served as inspiration for Marvel Comics and the Lord of the Rings.… (more)
LibraryThing member Jaded.Animal
Breathtaking illustrations that pull the reader immediately into the Norse myths they are retelling. A must for any history/english lesson.
LibraryThing member pjohanneson
This is the book that shifted me from Greek mythology to Norse. I was probably about 10 or 12 at the time.

Illustrated in what might be pencil crayon (which, to the 10-year-old me, implied that I or my friends could draw something similar), this collection of Norse myths showed me the wonder and the tragedy at the heart of mythology.… (more)
LibraryThing member themulhern
I, like many of the other reviewers, loved this book as a child. It's the softly countoured illustrations in the very large format, and all the wild adventures with the monster's and the fighting and the wierd magic of, e.g., the hammer.

The Norse myths are so imperfect, but these renditions of them are just wonderful.… (more)
LibraryThing member cassielanzas
D'Aulaires' book of Norse Myths is a picture book containing an adaptation of Norse myth. It begins with the creation of the world an chronicles the conflicts the Norse Gods and humans have with one another. I enjoyed this book, especially the pictures. They were create with limestone tablets prints using only four colors. The effect is unique and striking. I think this would be an excellent book for reading during a unit on mythology or independent reading. The D'Aulaires do an incredible job making the myths accessible.… (more)
Fewer