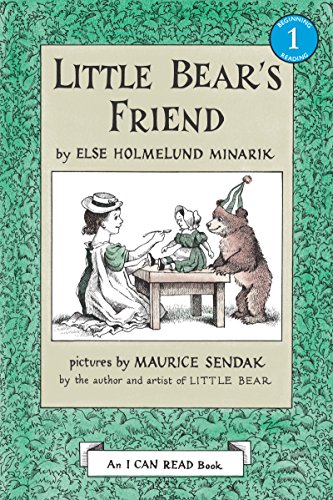 Little Bear's Friend (An I Can Read Book)

by Else Holmelund Minarik

One summer Little Bear makes friends with Emily and her doll Lucy.

LibraryThing member dbhutch
This is about when little bear met Lucy
6 more
LibraryThing member ashore06
Fantasy for primary (early readers). Little Bear and Emily become good friends and encounter little problems but work together to help other and eachother overcome them. When Emily goes back to school Little Bear is very sad but his mood improves when he is able to write her a letter. Media: Pencil and watercolor (Maurice Sendak)… (more)
LibraryThing member chelsealouise
Genre: This is modern fantasy because bears cannot talk, nor can owls or foxes or any animal in this book that lives a human life. Bears and the other animals do not live in human houses with human appliances and they are not friends with humans in reality. This is also fantasy because animals cannot speak with humans in English, let alone each other. It is creative but not possible at all.

The media looks to be some charcoal pencil work, graphite, ink, and maybe some watercolor work. There are not many colors, but I think this makes the book more interesting to readers because it is simple. The story line is involved enough that it is interesting to older readers, but it is simple enough for younger readers to take a long time with, perhaps with only one chapter at a time. The illustrations are well suited to the rest of the story and even though the details are small sometimes, it is easy to know what characters are which - this makes the story easy to follow.… (more)
LibraryThing member hcurrey
Little Bear and his friends model good manners, kindness, and helpfulness. This book would be good for guided reading, and children who have mastered it will be proud to read it to others.
LibraryThing member Cheryl_in_CC_NV
I hope the Little Bear easy readers stay in print. Imo, the sweet family love they portray will never be 'dated.'
LibraryThing member AbigailAdams26
Little Bear makes a human friend in this third early reader devoted to his adventures, discovering that allowing new people into one's life can bring both pleasure and sorrow. Like its two predecessors, Little Bear and Father Bear Comes Home, there are four brief stories presented here, beginning with Little Bear and Emily, in which little bear and little girl first meet and become friends. Duck, Baby Sitter sees the two meeting up with Little Bear's anatine friend, on their way to a party; while The Party at Owl's House sees Emily and her doll Lucy being introduced to Little Bear's circle of friends. All things must come to an end, and in Your Friend, Little Bear, our young ursine hero is distraught when Emily must leave at the end of the summer, but comforted by the knowledge that he can keep in touch with her through letter-writing.

First published in 1960, Little Bear's Friend was, together with its four companion volumes, an important part of my childhood library, and I can recall curling up with it on numerous occasions. Text and artwork - supplied by Else Holmelund Minarik and Maurice Sendak, respectively - work together seamlessly in these stories, drawing the young readers in to a fully realized world, one in which the child perspective is treated with respect and depicted with sympathy. As is the case with all of the Little Bear books, I loved the interaction between Little Bear and Mother Bear here - the teasing dialogue and underlying affection - as well as the immensely expressive artwork. Little Bear looks a little softer to me here, for some reason - a little cuter than in the previous two, perhaps? - but his facial expressions are still as droll and winsome as ever!

All in all, a lovely little book, one that I would strongly recommend to beginning readers looking for real stories, rather than reading exercises disguised as stories.… (more)
LibraryThing member MeditationesMartini
Little Bear is cute and kind, if somehow literal-minded--and if on the one hand I like that Emily's family are seemingly travelling tinkers or Roma people and it goes unremarked, I'm also a bit queasy about the gender representations here--does Little Bear's father have to be that much home from his job in the City with his hand tucked into his waistcoat, and could his mother perhaps call to mind at least the housewife of 1960 (when this book was written) and not 1860 with her dress that looks like a nightgown or her nightgown that looks like a dress? Shame, Maurice Sendak. But this is sweet.… (more)
Fewer