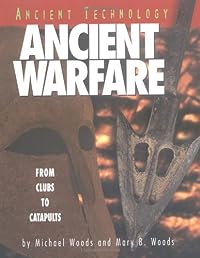 Ancient Technology provides a fascinating look at a particular area of technology as it developed in ancient times, from the first humans to the fall of the Western Roman Empire in A.D. 476. Each chapter covers a different ancient civilization, beginning with Stone Age cultures and progressing chronologically through others, such as the ancient Middle East, Egypt, China, Mesoamerica, Greece, Rome, and India. Every book includes a world map and timeline to show the location and timespan of each culture. Supports the national curriculum standards Culture; Time, Continuity, and Change; People, Places, and Environments; Science Technology and Society; and Global Connections as outlined by the National Council for the Social Studies.

The Roman Army: The Legendary Soldiers Who Created an Empire by Dyan Blacklock
Ancient Agriculture: From Foraging to Farming (Ancient Technology) by Michael Woods
Seven Wonders of Ancient Africa by Michael Woods
Ancient Greece (Voyages Through Time) by Peter Ackroyd
Seven Wonders of Ancient Central and South America by Michael Woods
6 more
South Africa (Enchantment of the World, Second) by Ettagale Blauer
A Roman Fort (Inside Story) by Fiona MacDonald
Peru (Enchantment of the World, Second) by Marion Morrison
Science in Ancient China (Science of the Past) by George W. Beshore
Voices : Poetry and Art from Around the World by Barbara Brenner
Olympic Games in ancient Greece by Shirley Glubok
Fewer