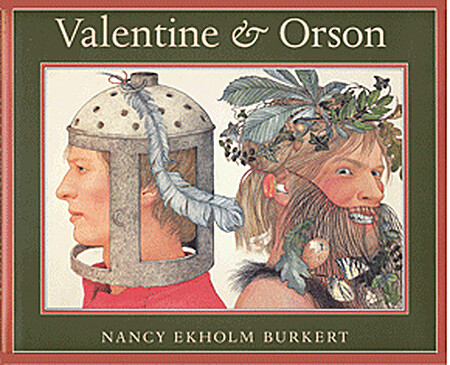 Twin brothers are separated at birth. One is raised as a knight, and the other as a wild animal in a forest. When they meet, they become friends, and try to discover the circumstances causing their separation.

LibraryThing member AbigailAdams26
The only book both written and illustrated by Nancy Ekholm Burkert - whose beautiful artwork has graced such publications as Roald Dahl's James and the Giant Peach (the original edition, before Quentin Blake got a hold of it) and Snow-White and the Seven Dwarfs, chosen as a Caldecott Honor Book in 1973 - Valentine and Orson is a retelling of a medieval chivalric romance (part of the Carolingian cycle) concerning twin brothers, separated at birth. Divided into nine scenes, it is presented as a play being given by a village theater troupe in sixteenth-century Flanders, and is written in iambic pentameter couplets!

This is all explained in the most informative afterword, in which Burkert reveals that her interest in the tale was first sparked by seeing Pieter Bruegel the Elder's print, The Masquerade of Valentine and Orson, which inspired her to set her "play" in Flanders. The poetic form is taken from Chaucer, as a tribute to The Canterbury Tales. You might think that such high-brow antecedents would make Burkert's retelling rather inaccessible, but nothing could be further from the truth - her story is immensely engaging, and reads well.

The illustrations, which appear in every other two-page spread (the text-only spreads are enlivened by a highly decorative initial number, corresponding to the scene, and each paragraph is separated by a little motif, but they are otherwise plain), depict the Flemish players enacting their medieval French (and Greek?) tale, and are simply gorgeous! Full of life and vitality, color and humor, they are a fairy-tale-lover's dream - I enjoyed poring over them, and picking out Burkert's brush-strokes!

This is a beautiful volume, with every detail - from the poetic narrative to the page-layout - presented with care and artistry. Even the type-face (Dante) is well-chosen! The story itself is exciting, with everything from giants to magicians, and young readers with a taste for adventure-tales will enjoy rooting for Valentine and Orson's reunion, and the proving of Empress Bellisant's innocence. I found myself, as always with such tales, as indignant with the faithless misogyny of the husband - so willing to believe the worst of his wife, with no evidence - as I was with the false accuser, but there you have it - western literature abounds with such unfortunate themes.

Definitely not one for the youngest fairy-tale crowd, Valentine and Orson is a book I would recommend to independent young readers with a taste for epics and poetry. Just beautiful!… (more)

Sir Gawain and the Loathly Lady by Selina Hastings
The Ballad of Biddy Early by Nancy Willard
Catkin by Antonia Barber
Dear Mili by Wilhelm Grimm
Swan Lake by Mark Helprin
10 more
Go in and Out the Window, 1987 publication
Gwinna by Barbara Helen Berger
Love Flute by Paul Goble
Stuffer by Peter Parnall
The Borrowers Afloat by Mary Norton
Fairies (Magical Beings) by Elizabeth Ratisseau
Snow-White and the Seven Dwarfs: A Tale from the Brothers Grimm (Sunburst Book) by Jacob Grimm
The Twelve Dancing Princesses by Marianna Mayer
The Book of Goddesses by Kris Waldherr
The Race of the Golden Apples by Claire Martin
Fewer