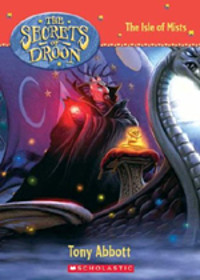 The Secrets of Droon - Book 22: The Isle of Mists

Three out of three! Sparr has found all of his Three Powers, and that adds up to big trouble for Droon. Armed with the Red Eye of Dawn, the Coiled Viper, and the Golden Wasp, Sparr is more powerful than ever. And once he reaches the Isle of Mists, he is going to try an amazing new magic trick. A trick to take over all of Droon. Evil Lord Sparr has collected all Three Powers, something he has been trying to do since the very first DROON adventure. Armed with the Coiled Viper, the Red Eye of Dawn, and the Golden Wasp, Sparr is ready to journey to the Isle of Mists-an eerie place of fog and darkness. Eric, Keeah, and the others are hot on his trail. But they are worried. The Isle of Mists is where Sparr's stepfather, Emperor Ko, mysteriously disappeared. Some even say that the evil ruler is still alive there. Sparr plus the Three Powers plus Emperor Ko? For Eric and his friends, that's not a good equation.… (more)