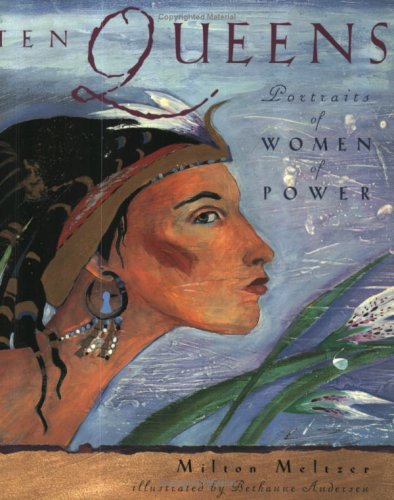 Powerful female rulers interpreted in striking words and paintingsFrom the courage and beauty of Esther to the reforming spirit of Catherine the Great. here are essays about ten queens by an author who has been called "arguably the best writer of social history for children and adolescents ever". Meltzer, by his own description, is accustomed to presenting history "from the bottom up", but he takes a "top down" approach for these monarchs, revealing the personal and political natures of women who commanded power not because "they happened to marry a king" but because they "ruled in their own right, by themselves. Or if they sat on thrones beside kings, they had as much or more to say about governing than their husbands".Most were, by today's standards, astonishingly young. Many were physically powerful, accomplished women. Some were schooled to rule, others not. But all were ambitious, passionate, and determined to hold power. All were subject to suspicion and envy. And all, in their successes and failures, ideals and compromises, assumptions and privileges, present interesting contrasts with the lives of women today.… (more)

LibraryThing member jebass
This book is the complement to Meltzer's "Ten Kings." It covers the life, times and reign of ten historical queens and offers a glimpse into their past.

This book would be great for any student who is interested in royalty (I myself love it). It's at an advanced reading level (and long), so it may require discussion to appeal to younger grades, but it is very informative and interesting. Also, as some rulers of the past were violent, it would be most appropriate for the older grades. It is an excellent source of information for Social Studies, specifically for cultural and world history.… (more)
1 more
LibraryThing member ADReed
"Why this book about the ten queens? These are not women who were called queens because they happened to marry a king and had little or nothing to say about ruling the country. These ten were women of power."

From start to finish, I fell completely in love with this book for various reasons, but mostly because I have always been very interested in women of power, particularly queens. From the lovely pictures of each queen, to the captivating biographies and intriguing facts, the ways to incorporate this into other readings or using it alone as a lesson or project seem endless, although it would depend on the age of audience. I think this could also lead into a great discussion about other women of power in history where I could ask the class what other women possess power that are/were not necessarily queens. I will be buying this book for future use!… (more)
Fewer

Sterling Biographies®: Cleopatra: Egypt's Last and Greatest Queen by Susan Blackaby
Lives of Extraordinary Women: Rulers, Rebels (and What the Neighbors Thought) by Kathleen Krull
To Be a Princess: The Fascinating Lives of Real Princesses by Hugh Brewster
Ten Kings: And The Worlds They Rule by Milton Meltzer
Cleopatra: The Queen of Dreams (What's Their Story?) by Haydn Middleton
14 more
World History Biographies: Eleanor of Aquitaine: The Queen Who Rode Off to Battle (National Geographic World History Biographies) by Ann Kramer
Gandhi by Demi
Lives of the Athletes: Thrills, Spills (and What the Neighbors Thought) by Kathleen Krull
Discovery of the Americas, The (American Story) by Betsy Maestro
100 Women Who Shaped World History (100 Series) by Gail Rolka
Favorite Medieval Tales by Mary Pope Osborne
The Last Princess: The Story of Princess Ka'Iulani of Hawai'I by Fay Stanley
The Double Life of Pocahontas by Jean Fritz
Around the World in a Hundred Years by Jean Fritz
The Egyptian News: History News 3000 B.C. - 1100 B.C by Scott Steedman
Stone Age People (Make It Work! History Series) by Keith Branigan
Miro (Famous Artists) by Nicholas Ross
Flying Machine (DK Eyewitness Books) by Andrew Nahum
Explorer (Eyewitness Books) by Rupert Matthews
Fewer