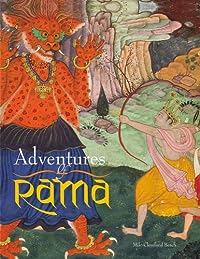 The Adventures of Rama: With illustrations from a 16th-century Mughal manuscript

The Adventures of Rama are incidents derived from the Ramayana, the ancient Hindu tale that was transmitted orally for centuries, captured intomagnificent painted texts by the Mughal ateliers who translated them into Persian. These incidents have been retold here and lavishly illustrated using original paintings from a 16th-century Mughal manuscript in Persian, ordered by Emperor Akbar for the commander-in-chief of the imperial army, Abd-ar-Rahim. Only 23 illustrations from the total 130 paintings are included in this book. The enthralling stories that string the epic together capture the imagination of young readers and adults alike. To rid the world of the evil ten-headed Ravana, the Hindu god Vishnu appears on Earth as a heroic prince, Rama. The devotion of his brother Lakshman, his marriage to the beautiful Sita, and encounters with demons, giants, sages, and holy men, form favorite episodes, familiar to any Hindu child. These stories conclude with Rama’s efforts to rescue the kidnapped Sita, aided by Hanuman, leader of an army of monkeys. First published in 1983 by the Freer Gallery of Art, this edition by Mapin is newly designed, enriched with details from the illustrations in the book.… (more)

The Golden Carp: And Other Tales from Vietnam by Lynette Dyer Vuong
The Hungry Coat: A Tale from Turkey by Demi
The King of Ireland's Son: An Irish Folk-tale by Padraic Colum
The Puffin Mahabharata by Namita Gokhale
Young Arthur by Robert D. San Souci
11 more
Lugalbanda: The Boy Who Got Caught Up in a War: An Epic Tale From Ancient Iraq (Aesop Prize (Awards)) by Kathy Henderson
Tales from Old Ireland by Malachy Doyle
Rama and Sita by David Weitzman
Seasons of Splendour by Madhur Jaffrey
The Girl Who Drew Butterflies: How Maria Merian's Art Changed Science by Joyce Sidman
Sir Gawain and the Loathly Lady by Selina Hastings
The Girl Who Dreamed Only Geese: And Other Tales of the Far North by Howard Norman
Not One Damsel in Distress: World Folktales for Strong Girls by Jane Yolen
The Dalai Lama: Foreword by His Holiness The Dalai Lama by Demi
Parzival: The Quest of the Grail Knight by Katherine Paterson
The Art of Maurice Sendak by Selma G. Lanes
Fewer