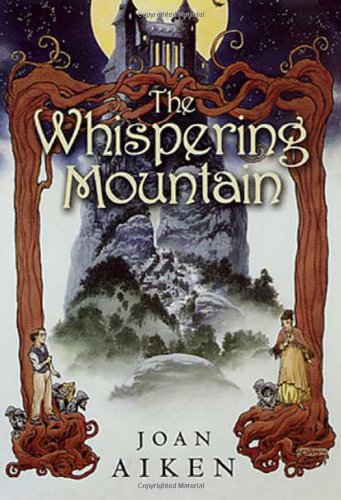 With the help of some unusual friends, a young boy tries to restore the Golden Harp of Teirtu to its rightful owner.

LibraryThing member ed.pendragon
Not strictly a prequel to the 'Wolves of Willoughby Chase' sequence (our young hero Owen Hughes re-appears around the time of the plot to slide St Paul's Cathedral into the Thames at a coronation), 'The Whispering Mountain' can nevertheless be enjoyed as a standalone novel as well as filling in more of Aiken's alternative history of the world in the early 19th century.

Set in and around the western coast of Wales, the tale features elements of Welsh mythology, Dark Age history and traditions of Nonconformism and mining, along with several other typical Aiken themes such as Arthurian legend (revisited in 'The Stolen Lake' for example), slavery underground (as in 'Is'), mistaken identities (as in 'The Cuckoo Tree') and dastardly villains (as in all the titles of the sequence). Although convoluted, the plot draws you along to the inevitable conclusion, and as always Aiken doesn't shy away from death even when writing for a youngish audience.

Of especial interest is the Welsh setting and use of language and traditions away from Aiken's usual specialities of Yorkshire and the southeast of England. Living in West Wales, I was particularly intrigued to see aspects of different real localities transmogrified to suit the story and the conceit of an alternative geography of Britain; and the use of Welsh phrases (there is a glossary at the end) and idioms when speaking English struck chords for even someone like me with only a passing acquaintance (and then some) with the language. I also loved the puns, such as the placename Pennygaff which, although it has a Welsh look to it (real placenames include Pen-y-fan and Pen-y-Bont, literally Mountain Top and Bridgend respectively), is actually taken from the name for a type of popular Victorian theatrical show.

All in all, then, this a book worth reading for its liveliness and inventiveness even if you're not a dyed-in-the-wool Aiken fan.… (more)
2 more
LibraryThing member AbigailAdams26
The Whispering Mountain, which John Clute calls an "associate title" in his encyclopedia of supernatural fiction writers, seems at first glance to be unrelated to the previous three in Aiken's Wolves Chronicles, except for the fact that it is set in the same alternative Britain. Much like Susan Cooper's Over Sea Under Stone and The Dark is Rising however, it introduces characters that enter the mainstream of the storyline in later titles, though in a much less vital capacity than seen in Cooper's sequence.

When young Owen Hughes comes to stay with his stern, unbending grandfather in the small Welsh village of Pennygaff, he finds himself falsely accused of stealing the Telyn Teirtu, a golden harp with a storied history stretching back to the days of King Arthur and before... Setting out to find the lost treasure, Owen must contend with the arrogant Marques of Malyn, a mysterious foreign gentleman calling himself the Seljuk of Rum, and the Tylwyth Teg, the legendary "Fair People" who live inside the Whispering Mountain... A rich and entertaining fantasy, so steeped in the folklore and culture of Wales, that a Welsh glossary is included at the back.

I am fortunate enough to own a first (American) edition of this wonderful title, which includes the black & white illustrations by Frank Bozzo - sadly missing from later editions.… (more)
LibraryThing member jjmcgaffey
Fun. Highly predictable, of course - I knew the boys would either become Owen's devoted followers or come to a bad end as soon as I read the first chapter, for instance. But nicely done, well-written, and fun. I wonder who wrote the prophecy? Ah, Arabis says "one of the old bards" - prophecy was their stock in trade. Slightly odd (for Aiken) in that some of the good guys, or at least not-bad guys (the footman, for one) actually die. And the bad guys, of course. Happy reunions and sorting-out of futures... I don't think I'd read this before (hard to tell, because of the predictability), but I'm glad I have now.… (more)
Fewer

The Homeward Bounders by Diana Wynne Jones
Five Children and It (Puffin Classics) by E. Nesbit