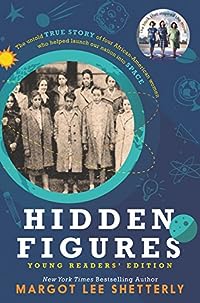 The uplifting, amazing true story--a New York Times bestseller This edition of Margot Lee Shetterly's acclaimed book is perfect for young readers. It is the powerful story of four African-American female mathematicians at NASA who helped achieve some of the greatest moments in our space program. Now a major motion picture starring Taraji P. Henson, Octavia Spencer, Janelle Monae, Kirsten Dunst, and Kevin Costner. Before John Glenn orbited the earth, or Neil Armstrong walked on the moon, a group of dedicated female mathematicians known as "human computers" used pencils, slide rules, and adding machines to calculate the numbers that would launch rockets, and astronauts, into space. This book brings to life the stories of Dorothy Vaughan, Mary Jackson, Katherine Johnson, and Christine Darden, who lived through the Civil Rights era, the Space Race, the Cold War, and the movement for gender equality, and whose work forever changed the face of NASA and the country.… (more)

LibraryThing member asomers
I read the young readers' edition to see how my students might react to the book. It is a worthy edition to the school library.
4 more
LibraryThing member AnaraGuard
Much more history than the movie could hold, but I didn't get to know the characters much better. The author had great access to oral history and archives, but could have used a bit of editing in deciding how much detail to include, or not. I think most filmgoers will be surprised by how less
Show More
novel-like, and more footnoted history, this book turned out to be.
Show Less
LibraryThing member ftbooklover
Hidden Figures is the story of Dorothy Vaughan, Mary Jackson, Katherine Johnson, and Christine Darden who during one of the most turbulent periods in US history defied expectations and became respected workers in what became NASA. Their expertise in mathematics made them invaluable during the
Show More
period of World War II and the space race of the 1960s. Their lives were not without strife as they survived family tragedies and worked with people who still harbored ill will toward African-Americans during the birth of the Civil Rights Movement.

This was an interesting story. It would have been better reading had it been told from the point of view of the women involved, telling their own stories rather than as a dry depiction of historical events. Otherwise this was a well written book detailing a unique group of women who succeeded in what was considered a man's world during a time when African-Americans lacked the respect of their peers.
Show Less
LibraryThing member jennybeast
Great history, and I enjoyed that the book centered on specific women's stories. Not a totally riveting read, but I also appreciated the way the book highlighted ongoing and consistent discrimination.
LibraryThing member suesbooks
This is both a realistic and an optimistic presentation of the difficulties Black women encountered throughout their lives. The main focus is on women who worked in both the aircraft and the space industries. For most of their careers, these women worked harder and were paid less than their white
Show More
counterparts. So many presented were polite to their abusers, a necessary, but painful response. This book begins almost a hundred years ago, and some progress has been made in the United States, but equality is far from achieved.
Show Less
Fewer

The Story Of Ruby Bridges by Robert Coles
If A Bus Could Talk: The Story of Rosa Parks by Faith Ringgold