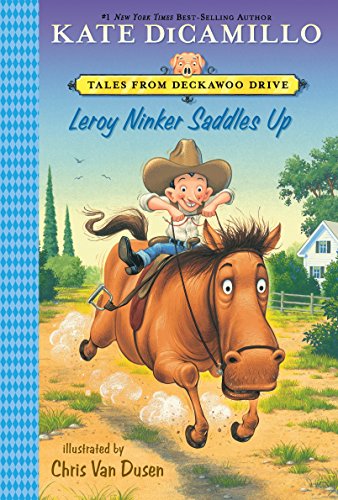 Leroy Ninker Saddles Up: Tales from Deckawoo Drive, Volume One

Yippie-i-oh! Saddle up for the first in a spin-off series starring favorite characters from Kate DiCamillo's New York Times best-selling Mercy Watson books. Leroy Ninker has a hat, a lasso, and boots. What he doesn't have is a horse--until he meets Maybelline, that is, and then it's love at first sight. Maybelline loves spaghetti and sweet nothings, and she loves Leroy, too. But when Leroy forgets the third and final rule of caring for Maybelline, disaster ensues. Can Leroy wrestle fate to the ground, rescue the horse of his heart, and lasso loneliness for good? Join Leroy, Maybelline, and a cast of familiar characters--Stella, Frank, Mrs. Watson, and everyone's favorite porcine wonder, Mercy--for some hilarious and heartfelt horsing around on Deckawoo Drive.… (more)

LibraryThing member AbigailAdams26
Leroy Ninker, the reformed thief and would-be cowboy who first appeared in Mercy Watson Fights Crime, the third in Kate DiCamillo's early chapter-book series about an unusual pig, returns in his own adventure here, launching a new series, Tales from Deckawoo Drive. Still hoping to be a cowboy, Leroy sets out to obtain a horse, eventually finding himself the proud owner of an older equine named Maybelline. But when he forgets that his new companion doesn't like to be left alone - especially in thunder storms! - it looks like he will lose her. Or will he...?

This being a Kate DiCamillo story, there's never much doubt that matters will end well, but fans of Mercy Watson will still enjoy watching Leroy find his happy ending. The reading level here is a step up from the Mercy Watson books, making it the perfect next stage for children who have read those adventures and are looking for more. Just as with the earlier series, the artwork here is provided by Chris Van Dusen, although sadly it is in black and white. I thought this was rather a shame, as part of the appeal of Mercy Watson is the vibrantly colorful vintage-feeling artwork. Still, Leroy Ninker Saddles Up is well worth a look for Mercy Watson fans, or for any child looking for entertaining chapter-books.… (more)
6 more
LibraryThing member LibraryGirl11
Still not a Kate DiCamillo fan.
LibraryThing member Whisper1
eroy Ninker is a tiny man who works at the local drive in theater. Leroy likes it there because night after night on the big screen he sees cowboy movies. Wearing a large hat and donning cowboy boots, he longs to be an actual cowboy.

If you can dispel the need for things to make sense, then you can enjoy this happy tale of a man who makes no plans for his dreams, allowing the horse to stay without a barn, scared of the thunder and lightening.

Leroy and his horse make friends and all is happy ever after.

This is cute with lovely illustrations. I read it because Kat DiCamillo is one of my favorite authors. This is not one of her best.… (more)
LibraryThing member jwyss
If you read it out loud, make sure to put on voices for extra listing pleasure.
LibraryThing member jothebookgirl
Short of stature, Leroy Ninker, sells concessions at the local drive- in theater. Whenever he sees a cowboy movie, all he can think about is being a real cowboy. After all, he has a hat, boots and a lasso. His co- worker Beatrice points out one day that he is missing something vital to being a cowboy; a horse. Now Leroy feels even less like a cowboy. After reading an ad in the newspaper about a horse for sale, Leroy walls to the address, hoping he has enough money to buy the horse he plans to name Tornado. Well, the horse is a bit old and saggy, with only four teeth, but this is good enough for Leroy Ninker. When he gets back to his apartment Maybelline, the horses' real and more fitting name, won't fit through the door. Also he doesn't know what a horse eats. In the end of this sweet, funny little novel, Maybelline and Leroy become best friends. There is a big surprise at the end of the book you won't want to miss.… (more)
LibraryThing member rjrubylou
Summary:Leroy Ninker is a little wanna be cowboy working at the drive-in movie theater. All he has to do is get himself a horse so he can be a real cowboy. He's told to check out the horse's teeth and hooves before he makes a commitment. Enter Maybelline. She has 4 teeth, and she does have hooves. She's old and is particular to how she likes people talking to her. She also doesn't like to be left alone...ever. Leroy knows how to sweet talk Maybelline. After all he's seen plenty of sappy movies to know how to woo a girl. He sweet talks Maybelline, but makes the mistake of leaving her alone just as a loud and thunderous storm moves in. Maybelline talkes off, terrified. Will Leroy find his beloved horse. A man ain't a true cowboy without his horse.
Personal Response:This book was cute and characteristically "Kate Dicamillo" with really nice character development. My problem with this book was the ending (hence the three star reviews). The story is moving along at a pleasant clip-clop, when all of a sudden we find ourselves on Deckawoo Drive where Mercy Watson, the pig from another of Dicamillo's books resides. If you have no knowledge of that other series of books, the ending seems rushed, and actually quite absurd. Other than that, I love Leroy Ninker as the main character. He is a sweet talking little cowboy who knows how woo his new horse Maybelline.
Curriculum Connections:This is a great book to introduce second and third grade readers to "good-fit" books in the library. Near the beginning of the year we talk a lot about making good choices for ourselves (not our friends) when we are out at the bookshelves. We should take time to look at the cover, read the inside or back cover, and read a page or two to determine if we can read it without too many mistakes, and we can read with understanding. I pull a variety of books and model this type of thinking for the kids as we review various types of "good-fit" books. This will definitely be a book that I will be pulling from the shelves next year to include in our discussion. I know that kids will love the cowboy theme of this book, as we are the "Cowboy" state of Wyoming.… (more)
LibraryThing member REINADECOPIAYPEGA
I never miss the chance to read new books as they come out from Kate DiCamillo. I have loved her stories and story telling ever since I read and saw Because of Winn Dixie.

This is a sweet story of a little man who wanted to become a cowboy after seeing so many cowboy movies and the horse, Maybelline that he buys in order to become a real cowboy.