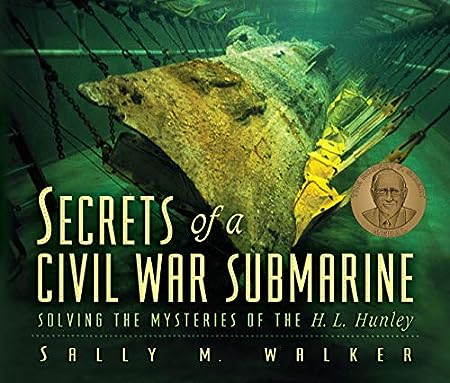 Secrets Of A Civil War Submarine: Solving The Mysteries Of The H. L. Hunley

A little-known story of the Civil War is brought to life in this gripping work of nonfiction. When the Union blockade of all ports in the South stopped supplies from reaching the Confederate Army, Horace L. Hunley created a submarine that could sneak up on enemy ships and blow them up. After many years of trial and error, the H. L. Hunley succeeded in sinking the USS Housatonic in February of 1864. But the submarine never returned to port, and her crew perished in the Charleston Harbor. Although divers searched for more than 130 years, the submarine was not found until 1995. Over the last ten years, archaeologists have carefully raised the Hunley and painstakingly sifted through the 20,000 pounds of sediment it contained for artifacts and human remains and, ultimately, clues to why, when, and how the vessel sank.… (more)

LibraryThing member KelliSingleton
In Charleston, North Carolina a submarine was sunk beneath the ocean floor. The submarine was a Civil War weapon. The submarine was named H.L. Hunley. It was the first submarine to sink an enemy ship. William Alexander was one of the men that operated the Hunley. President Dixon and Alexander wanted to solve the mystery of what had happened to the submarine, did they? The Hunley never returned to port after sinking that first enemy ship outside the port of Charleston. The Hunley is a GREAT piece of HISTORY. The Hunley still remains as a mystery.
This book taught me a lot that I didn’t know. It was forsure KNOWLEGDEABLE!! There are a great number of activities that go a long with this book. Great for a HISTORY class. I would teach the students maps of the united states with this book. I would print off a bunch of different maps, kind of like the ones they use in the books and have my students color and label them. After teaching the book, I would give a BIG map test.
When I first started reading this book it was boring and confusing, as I kept reading I started to enjoy it. I guess I could say it’s a great book for a historic fiction book. But History is kind of boring to me, so therefore the book was. I would greatly recommend teaching this book to middle school aged children.… (more)
8 more
LibraryThing member cinf0master
Landsman Robert Flemming came on duty at 8:00 on the night of February 17. At about 8:45, Flemming saw something floating about 400 ft off the Houatonic’s starboard side, heading for the ship. The object “was not floating wih the tide as a long would, but moving across the tide.” On the deck, the gong rang to call the crew to their battle stations. An enemy ship was closing fast, and there was no time for escape. The torpedo exploded with a muffled noise that sounded to Flemming like “wood splashing into water.” Black smoke rose from the Housatonic. The ships deck listed sharply to the right and shuddered. Then the timbers cracked apart and wood flew everywhere. The H.L. Hunley’s mission was a success.

She never returned to port.

Harry Pecorelli, Wes Hall, and Ralph Wilbanks, working with Clive Cussler and the South Carolina Institute of Archaeology and Anthropology, recovered the Hunley, which had spent 131 years under water.

But how to excavate this discovery? The Hunley was a technological achievement, but also a war grave. Careful planning for excavation and preservation process was essential.

In a giant tank, filled with chilled water, charged with a gentle electrical current, the Warren Lasch Conservation Center began to unlock the secrets of a Civil War submarine.… (more)
LibraryThing member kateweber
This is a fascinating book about the Civil War-era loss and modern finding of the first submarine. Detailed science writing in conjunction with cliff-hanging chapter endings kept this reader up past her bedtime. The illustrations include original letters about the Hunley, drawings of the submarine, and photographs of her recovery along with recreations of those who perished inside. However, at times the book was text-heavy, though the writing seemed aimed at an appropriate reading level. Overall, an informative and interesting read.… (more)
LibraryThing member mmpvppl
Very cool! Solving the mystery of why the H.S. Hunley sunk during a Civil War battle. I like the way the story starts during the Civil War and then goes on to current day.
LibraryThing member abbylibrarian
The H.L. Hunley, the first submarine to ever sink another ship was lost, along with its eight-man crew, in 1864. Although both Confederate and Union forces searched for her, no one was ever able to find her... until 1995, over 130 years after she went down. A team of researchers found her and on August 8, 2000, she saw the light of day again. This book gives the history of this long-lost civil war submarine and tells about how archaeologists preserved the remains and excavated the ship in order to learn what happened to her. An excellent read.… (more)
LibraryThing member Salsabrarian
Riveting account of the H.L. Hunley, the first submarine ever to sink an enemy ship during the Civil War. The first part covers its early triumphant but tragic history. The submarine's design and inner workings are clearly described. After 130 years and many efforts the Hunley was located buried in Charleston Harbor and raised in 2000. The author describes the painstaking and delicate efforts archaeologists used to uncover the mysteries and victims of the Hunley. Other sciences involved in unlocking its story included geology, forensic genealogy, DNA testing, and forensic art. There are still questions about what happened and how the submarine was built; work continues today on the Hunley.… (more)
LibraryThing member JeneenNammar
4th to 12th grade. Winner of the 2006 Robert F. Sibert Medal and a 2006 ALA Notable Book, Secrets of a Civil War Submarine is a gripping nonfiction picture book that will appeal to a wide range of audience. In it Sally M. Walker provides a complete account of the Confederate submarine the H.L. Hunley- why it was made, its battle history, how it could have been lost, and how it became a great archeological discovery late last century. She does so in 112 pages, making this a longer nonfiction picture book. But it is formatted to be informative and allow the reader to skip to sections of interest. To begin with, the first 38 pages provide the history on the Hunley in a Prologue and 4 chapters. These chapters are delineated by being printed on light yellow brown pages and so appear historical in nature. Then the rest of the book is printed on regularly colored white pages to represent contemporary times and the discovery, excavation, and the archaeological treatment of the Hunley. Throughout the text, Walker provides photographs as well as pictures of maps, paintings, letters, artifacts, and architectural drawings. They add interest, support the text, and help identify sections of the book. The cover photograph of the Hunley right before it was lifted from the Atlantic sea floor was an excellent choice for the book cover. Metaphorically it represents the process the Hunley undergoes in the reader's imagination. It is being lifted from obscurity to becoming meaningful in the present. This book is highly recommended for public libraries as well as elementary, middle, and high school libraries. A challenge for younger children and easier for teenagers, Secrets of a Civil War Submarine will appeal to all.… (more)
LibraryThing member mbklibrary
A really interesting book on an relatively unknown topic - a Civil War submarine. Well written, well researched and very interesting. Great for middle school and upper elementary.
LibraryThing member dhn
This is the account of the H.L. Hunley, a civil war submarine that made history in 1864 as the first submarine to sink an enemy ship in battle. The book describes in detail the creation of the submarine with impressive diagrams and discusses the problems and tragedies that were encountered in attempting to produce a working specimen. The H.L. Hunley had shortlived success when she sank the Housatonic and then never returned to port. Many looked for the submarine, but it was well hidden on the murky bottom of the ocean floor. In 1995, the long sought after submarine was discovered by a group led by author Clive Cussler. The book documents the controversy surrounding the submarine and the challenges scientists faced raising and preserving such an important part of civil war history. This is a book that adolescents and adults would find captivating and informative. Well worth the time spent to read this book.… (more)
Fewer

Team Moon: How 400,000 People Landed Apollo 11 on the Moon by Catherine Thimmesh
Civil War Sub: The Mystery of the Hunley (GB) (All Aboard Reading) by Kate Boehm Jerome
Ghost Liners: Exploring the World's Greatest Lost Ships by Robert Ballard
The Voice That Challenged a Nation: Marian Anderson and the Struggle for Equal Rights by Russell Freedman
The Tarantula Scientist (Scientists in the Field Series) by Sy Montgomery
4 more
Civil War (DK Eyewitness Books) by John Stanchack
Fields of Fury: The American Civil War by James M. McPherson
M.L.K.: The Journey of a King by Tonya Bolden
Exploring the Bismarck (A Time Quest Book) by Robert D. Ballard
Fewer