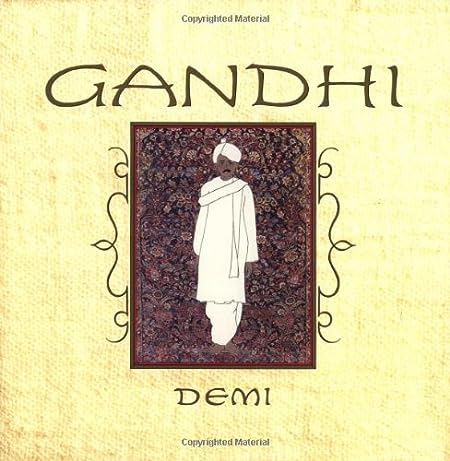 Mohandas Karamchand Gandhi, known by his followers as Mahatma -- or great soul -- was born in India in 1869 and grew up to become one of the most influential and well-respected political and social leaders the world has ever known. An adamant idealist and a courageous thinker, Gandhi identified himself with the struggles of the common people. He became the sole voice of the downtrodden and the exploited and believed fervently in the notion that "hatred can only be overcome by love." He vowed to instigate social and political change through nonviolent means and succeeded in changing India's prejudicial caste system and winning India's independence from British rule. Gandhi's teachings inspired Martin Luther King's nonviolent civil rights movement in the United States and Nelson Mandela's anti-apartheid movement in South Africa. Gandhi's philosophies of nonviolence and peaceful protest continue to inspire people around the world. In beautiful language and exquisite illustrations inspired by Gandhi's own belief in the simplicity and truth of life, Demi captures the spirit that was Mahatma Gandhi and pays homage to this great man.… (more)

LibraryThing member jaia
The life of Mahatma Gandhi is told with respect and beauty in this picture book by Demi. Demi makes the reader feel like they can relate to this inspirational man by sharing his fears and weaknesses, and telling us how he overcame them. His message of love and peace shines through without seeming dogmatic or preachy. I was reminded of his similarities to Martin Luther King Jr. when reading this book.… (more)
9 more
LibraryThing member Calleen1
In beautiful language and exquisite illustrations inspired by Gandhi's own belief in the simplicity and truth of life, Demi captures the spirit that was Mahatma Gandhi and pays homage to this great man.
Demi presents the story of Mohandas Ghandi, who evolved from a shy, scarred child to a self-reliant man determined to lead millions of Indian people out from the rule of the British Empire through non-violent means.… (more)
LibraryThing member MrBean
Suggested age: Grade 4+. Genre: Biography.
This book follows the life of Mohandas Gandhi starting with his early life in India. It follows him through his studies in England, his failed law practice back in India, and on to his early activism in South Africa. Finally, the story returns with Gandhi to India for his famous resistance to the British empire. It even includes some of his later work in attempting to unite India and Pakistan. This would be a great book to introduce to students when talking about initiating change in society, or peaceful protest. It would also be valuable for inclusion for a multicultural perspective on any of several issues.… (more)
LibraryThing member dylantanner
The story of Gandhi, the great pacifist and activist of India as told by renowned author/illustrator Demi.

This is sort of a straight ahead Gandhi fact book, which is OK for mid elementary readers. Demi's illustration is phenomenal as ever, but I prefer his Buddha and LOVE the Hungry Coat. His style captures Indian aesthetic so well.

This might be too dry for many readers, and the illustration is something you have to have an appreciation for or else it's not so engaging. So for young readers not specifically after of those things it could be too dry.… (more)
LibraryThing member sderby
Demi used a much simpler style to illustrate this biography of India's most important civil rights hero. The book details Gandhi's life, using some excerpts from the Bhagavad Ghita and his experiences in the UK and South Africa to show how he arrived at his theory of non-violent protest.
LibraryThing member MelAKnee
Ganhdi was born into society and wealth because his father was a prime minister in the princes court in India. As he progressed in life as a lawyer, Ganhdi would later be known as one of the most influential political and social leaders of his time. He identified with the common people's ways of life and struggles. Brightly colored illustrations, an easy to read story.… (more)
LibraryThing member BarrettOlivia
I enjoyed this biography of Ghandi over the other Gandhi biography I chose, by Leonard Everett Fisher. This book contained more information in less complicated sentence structures, making it easier to understand. The illustrations are much more colorful as well. This book does a good job at providing impact to the reader that peaceful methods of resolving conflict can be more useful than aggressive ways. Gandhi was a spiritual and happy man, and many people could use to adopt some of his characteristics, he should be a more influential person of history for young children. Sadly, this book did not contain any sources to back up the historical information.… (more)
LibraryThing member ppoche
Gandhi is for children. It has beautiful illustrations that are drawn in an Indian style. Gandhi is a thorough biography. It includes a map which highlights countries that were important in his life. It also shows how peace and love is always preferred over violence.
LibraryThing member reynolds2
Again, I truly enjoyed reading a short, illustrated biography of this great man I have heard so much about, but didn't truly know much about. This would be a great man to study when teaching tolerance, empathy and non-violent ways of solving problems!
LibraryThing member lekenned
A biography about the life of the famous political and social leader and his fight to help the people of India. This would be a good book when teaching students different cultures and famous people in history.
Fewer

The Dalai Lama: Foreword by His Holiness The Dalai Lama by Demi
Muhammad by Demi
Confucius: The Golden Rule by Russell Freedman
Su Dongpo: Chinese Genius by Demi
The Shortest Day: Celebrating the Winter Solstice by Wendy Pfeffer
14 more
One Grain Of Rice: A Mathematical Folktale by Demi
Jesus : based on the King James version of the Holy Bible by Demi.,
The Legend of Lao Tzu and the Tao Te Ching by Demi
The Legend of Saint Nicholas by Demi
The Empty Pot by Demi
Buddha Stories by Demi
Florence Nightingale by Demi
Brother Eagle, Sister Sky by Susan Jeffers
The Hungry Coat: A Tale from Turkey by Demi
Ten Queens: Portraits of Women of Power by Milton Meltzer
Gandhi: The Father of Modern India (What's Their Story?) by Pratima Mitchell
Mayflower 1620: A New Look at a Pilgrim Voyage by Peter Arenstam
In the Beginning: Creation Stories from Around the World by Virginia Hamilton
Bard of Avon: The Story of William Shakespeare by Diane Stanley
Fewer