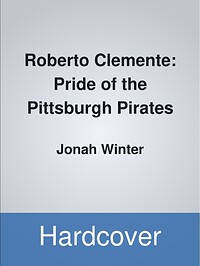 On an island called Puerto Rico a boy named Roberto Clemente dreamed of nothing but winning at baseball. With no money -- but plenty of determination -- Clemente practiced on muddy fields with a glove made from a coffee sack. Little League became minor league, which turned into winter league...and, finally, he made it to the major leagues! With lightning speed, towering home runs, and grand slams, Clemente introduced himself to America. Spare, evocative language -- and magnificent illustrations -- tell the story of a great athlete and even greater man who rose through the ranks of baseball to become one of the most admired players of all time.

LibraryThing member mackenzie
This richly-illustrated book weaves the story of the life and career of Roberto Clemente, the Puerto Rican humanitarian and athelete who played baseball for the Pittsburg Pirates. Roberto struggles with determination to adjust to the United States, earn the respect he deserves and play the best
Show More
ballgame he can.
Show Less
4 more
LibraryThing member acwheeler
Roberto Clemente is a famous baseball player who grew up in Cuba playing the sport he loved, baseball. Roberto worked very hard to finally make it to the major leagues to play for the Pittsburgh Pirates. He ended up changing the teams appearance for years to come. Roberto lead his team to play the
Show More
New York Giants in the world championship game. Defeating the Giants will always be remembered for the Pirates. Roberto was not only a leading player on the time, but was a great role model for all. He even went back to Cuba to do community service around his town. Sadly, Roberto died in a plane crash on his way to help victims from the earthquake in Nicaragua. He will always be remembered as a true role model and amazing player for the Pittsburgh Pirates.
Show Less
LibraryThing member Ms.Penniman
Retelling: This is the life story of Roberto Clemente. The author focuses on his adjustment to his new home, America, his response to racist reporters, and his philosophy.

DK Readers: Roberto Clemente (Level 3: Reading Alone) by DK Publishing
Harvesting Hope: The Story of Cesar Chavez by Kathleen Krull
Mighty Jackie: The Strike-Out Queen by Marissa Moss
Talkin' About Bessie: The Story of Aviator Elizabeth Coleman (Coretta Scott King Author Honor Books) by Nikki Grimes
The Story Of Ruby Bridges by Robert Coles
3 more
So You Want to Be President?: The Revised and Updated Edition by Judith St. George
Duke Ellington: The Piano Prince and His Orchestra by Andea Davis Pinkney
Lives of the Athletes: Thrills, Spills (and What the Neighbors Thought) by Kathleen Krull
Fewer