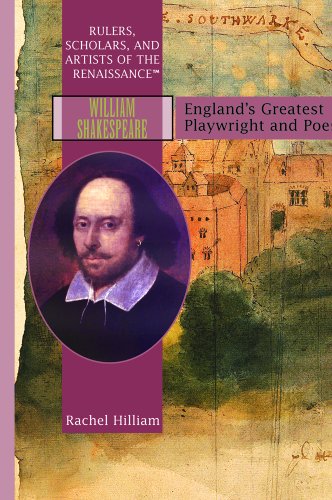 These sweeping, lavishly illustrated biographies of influential Renaissance figures draw on the most recent and authoritative scholarship available. The dawn of the Renaissance reintroduced classical learning, advanced scientific thought. and humanist ideals to a Europe that had been plagued by war, disease, tyranny, and superstition. Driven by the rediscovery of Greek and Roman texts lost during the barbarian invasions of the Middle Ages, the Renaissance era was characterized by tremendous artistic, scientific, economic, and political development. All of these astonishing developments influenced the leaders and artists of the time. The six books in this extraordinary series provide a solid and fascinating survey of the Renaissance and bring the creative environment of that time to life. This fascinating book focuses on the historical currents that influenced Shakespeare's life and work. Born into an era of intense civil, political, and religious strife. Shakespeare lived in an England plagued byreligious warfare, disease, and poverty, At the same time, he was also witness to dazzling spectacles, scarcely believable tales of exploration, and the birth of live theater as we know it. Out of this creative and volatile social environment, Shakespeare's artistry emerged. This richly detailed biography provides invaluable context to his work.… (more)