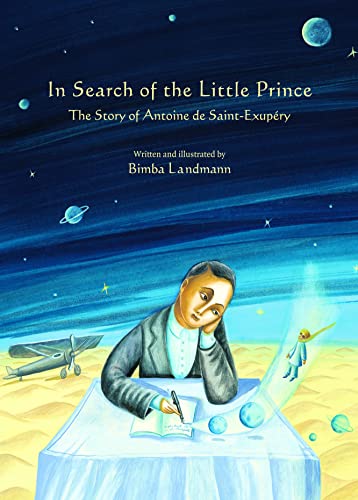 In Search of the Little Prince

As a child, Antoine dreamed of flying. His dream was realized when he became a pilot, first serving France during World War I, then working as an international mail courier. As he wrote letters to his family describing the foreign countries he visited, he soon discovered that writing contained its own sense of adventure. His stories showed a childlike fascination with the world, culminating with The Little Prince, one of the best-selling books ever published.

LibraryThing member hannahchristine
Bimba Landmann's 'In Search of the Little Prince' is, as the title suggests, "the story of Antoine de Saint-Exupery." This book captured the strange and quirky nature of 'The Little Prince' and Saint-Exupery. The odd style of the paintings on every page aid in the telling of the story of his life. I enjoyed the artwork in the book and found the text simple but still informational. It's easy to see that Landmann worked extremely hard on his book, showing his dedication to detail and interest in Saint-Exupery. Overall, a good read. I would recommend this book to anyone looking for a simple overview of Antoine de Saint-Exupery's life, or background on 'The Little Prince.'… (more)
7 more
LibraryThing member jugglingpaynes
In Search of the Little Prince by Bimba Landmann is a sweet picture book with artwork inspired by The Little Prince. The book tells about the life of Antoine de Saint-Exupery in a simple way for young readers. From such a short story, I myself learned a great deal about the author, his love of planes, writing, and adventure. You also learn about how he wrote his last and most cherished book, The Little Prince. The illustrations have a dreamy, whimsical quality that make you smile and imagine you are inside the writer's active imagination. This is the kind of story that sent me in search of more information. I had the review copy of the picture book, so I'm not sure if this was already done, but it would be a nice if extra information were given about Saint-Exupery at the end of the book. Something for the curious who want to know a little more about this interesting author.… (more)
LibraryThing member smittyvol
I love The Little Prince. I had also read a little about Saint-Exupery's life, particularly his crash I'm the desert. The story of his life is told in this book for children (and adults) in a style that reminded me of The Little Prince. It is a biography, but it has the whimsy of an adventure story. The art is beautiful and almost dreamlike. I recommend this to anyone who has or plans to read The Little Prince or generally loves children's literature with excellent art.

Disclaimer: I received a free preview copy with the request that I review it.

That said, this copy is not in the final bound form. I will buy a copy.… (more)
LibraryThing member BevFuller
I won "In Search Of The Little Prince" on LibraryThing. I loved it. As someone who read "The Little Prince" and loved it, as I'm sure many, many other people have, I was thrilled to have the privilege of reading the advanced reader's copy of this book. The illustrations are beautiful and the writing is compelling. The author pulls you into her words and holds you through the entire book. I was mesmerized.… (more)
LibraryThing member Daniel.Estes
In Search of the Little Prince by Bimba Landmann packs more punch from its gorgeous, sprawling illustrations than from its length. It's short and I think it's meant to be a children's book, and its designed in a style loosely resembling its inspirational source, The Little Prince.

This mini-biography of author and pilot Antoine de Saint Exupéry is evidently condensed to fit the book's format. Herein you get a tender overview of the man's life though it is conspicuously missing some of the more nuanced and darker elements of his story.… (more)
LibraryThing member Sullywriter
A richly imagined, poetic introduction to aviator and author Antoine de Saint-Exupéry. Beautifully illustrated in dreamlike images. See also Peter Sís's The Pilot and the Little Prince.
LibraryThing member theresearcher
Well-done biography of an author drawing on the perspective of his most famous book. If you like "The Little Prince," then this additional look at Saint-Exupery's life is well worth the time. Illustrations reflect the Little Prince's commitment to fantasy and subtle absurdity.
LibraryThing member kaulsu
For those readers who fell in love with [The Little Prince], this is a lovely biography written and superbly illustrated by [Bimba Landmann]. Eerdman's used a variety of finishes on the pages, which further enhances the visual feast with a tactile enjoyment.

The language Landmann employs is neither childlike nor too lofty. The illustrations are uncomplicated, yet require close attention to plumb their depths.

This was an unbound galley copy of a book to be published by Eerdman's. I highly recommend it for older children (10-12) who enjoyed reading, or having [The Little Prince] read to them, at a younger age.… (more)
Fewer

The Little Prince by Antoine de Saint-Exupéry
Lost Boy: the Story of the Man Who Created Peter Pan by Jane Yolen
Who Was Edgar Allan Poe? by Jim Gigliotti
Who Was J. R. R. Tolkien? by Pam Pollack
Some Writer! The Story of E.B.White by Melissa Sweet
5 more
Su Dongpo: Chinese Genius by Demi
Amelia Earhart: Young Aviator (Childhood of Famous Americans) by Beatrice Gormley
Firetalking (Meet the Author) by Patricia Polacco
Who Was Dr. Seuss? by Janet Pascal
Who Was Beatrix Potter? by Sarah Fabiny
Fewer