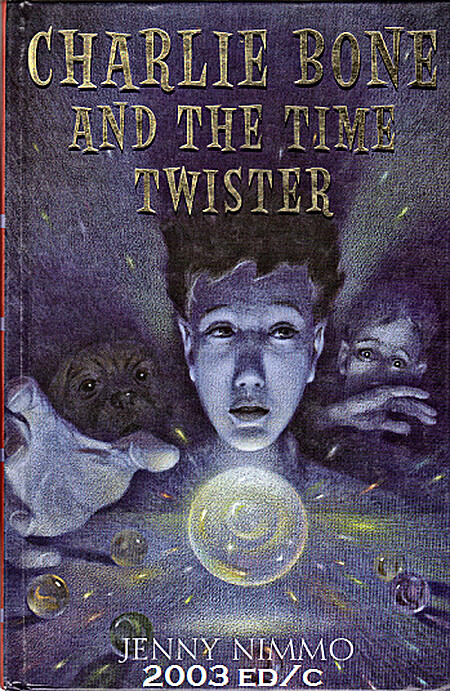 Children of the Red King

In January 1916 Henry Yewbeam and his younger brother, James, have been sent to stay with their cousins at the Bloor's Academy. It is one of the coldest days of the year, and all Henry wants to do is hide from his mean cousins and play marbles. He finds a nice, long hall and begins to roll his marbles. Then he discovers a marble that doesn't look familiar to him. Suddenly a series of strange events takes place. Henry begins to disappear. He quickly scribbles on the floor Give The Marble To James, and then he vanishes from the year 1916.

LibraryThing member sirfurboy
I read the first Charlie Bone a long time ago - when it was new. At the time I felt it was a poor copy of the Harry Potter concept - too obviously deriviative. I finally returned to the series this week, reading the second book - and I think that this book manages to move away from the Harry Potter similarities and develop into a work in its own right.

The books are aimed at younger readers than Harry Potter, so comparisons are unfair. For their target audeince, these will be enjoyable books with a good adventure, and one that can be enjoyed by older readers too.

Not my favourite of Jenny Nimmo's work, but a good read all the same.… (more)
17 more
LibraryThing member wiremonkey
Charlie Bone is the second title in Nimmo's Charlie Bone series and does a good job at keeping pace with the first novel. It begins right after the first book, at the beginning of the second half of the school year. The plot quickly turns ominous when a strange boy appears out of nowhere, a boy who looks uncannily like Charlie himself. Charlie and his friends once again find themselves pitted against their evil relatives, in a story that is setting the stage for a great battle between the warring factions of the children of the red king. Although good for a quick read, this series does not provide the suspense or the manic need to keep on reading as the Harry Potter series. Still, it is a good substitute in those times of desperately needing an English magic school fix.… (more)
LibraryThing member buckeyeaholic
The Charlie Bone series will keep those 'when is the next Potter book coming out' jitters at bay. Sorry Ms Nimmo but they just aren't as good. They seem a little more loosly written, not quite as polished. And I can't believe someone hasn't been sued for plagerism. There is a castle that serves as a school, evil teachers/students, nasty aunts, talking pictures, a Pettigrew and many other similarities.
Don't get me wrong, they were entertaining. Just missing something.… (more)
LibraryThing member sara_k
Charlie Bone and the Time Twister is second in the Charlie Bone series.

Charlie Bone is still at Bloor's Academy. In this book we learn more about his fellow endowed students and some of the faculty and staff at Bloor's. While Charlie's circle of friends and supporters is widening, the next mystery is very close to him. The Time Twister has brought a boy out of the past into Charlie's time; this isn't just any boy, this is Charlie's Great-Great-Uncle Henry who is only a boy of 11.

The Bloor's and Charlie's weird and mean Grandmother and Aunts want to catch Henry and their plans are not friendly. Charlie must figure out how to save Henry while strengthening the community of good and helpful endowed students. Not all the endowed students are on the side of good, some of them are openly following the evil Bloor patriarch. Can Charlie and his friends band together in order to do good? Can they send Henry back to his own time? Will Charlie figure out what happened to his father?

These books were a big hit with the 3-7th grade children who recommended them to me.… (more)
LibraryThing member bookcurse
Midnight For Charlie Bone, Charlie Bone and the Time Twister ,and Charlie Bone and the Invisible Boy by Jenny Nimmo are pretty good books. They are about Charlie bone, a 10/11 year old boy who discovers he has the magical ability to hear people talking in pictures [what they said what the picture was taken]. His gleeful aunts quickly ship him off to Bloor's Academy, where geniuses go. When he gets there, Charlie discovers a thick plot that begins to unravel, concerning a traded off baby, a hypnotised girl and a missing father. The next 2 books are different, much easier to understand. It might just be me, but in the first 2 books, I kept messing up who people are.… (more)
LibraryThing member caro488
Nimmo, Jenny, Charlie Bone and the Time Twister, Chldren of the Red King Book 2 Henry Yewbeam was tricked into traveling in time, so he shows up in Bloor's a hundred years (give or take) after he left it. Charlie tries to get him home, tries to hide him, tries to find him a safe place to grow up.
LibraryThing member tjsjohanna
I enjoyed this installment in the series quite as much as the first. I'm enjoying watching adults "come out of the woodwork" to help Charlie. I liked that this book ended with another party. Even though there are wicked adults, there are adults that take care of the children in these novels, which is a good message.
LibraryThing member TwilightBlue
This series reminds me a lot of the Harry Potter series. A boy with magical powers goes to school were all sorts of bad things happen. And of course Charlie always triumphs. There's differences in story line and character develop and such. All in all it's a nice book. A little bit younger than Harry Potter readers.
LibraryThing member iamagirldork
The second of the Charlie Bone series. Charlie is still attending Bloor's Academy and he encounters a relative who has traveled through time - against his will. Will Charlie return things to normal again?

Nimmo's writing allows the reader to travel along and experience all the things Charlie does. Great, fun, entertaining!… (more)
LibraryThing member KevinT10
The novel, Charlie Bone and the Time Twister, encompasses the theme that you never know who to trust. In the beginning, Henry Yewbeam, one of the protagonists struggles with his evil cousin Ezekiel sending him into the future using a marble called the Time Twister. Henry Yewbeam ends up at Bloor's Academy where he finds his evil cousin Ezekiel who is now 100 years old. Throughout the middle, Charlie Bone and Henry meet one day as Charlie is walking the halls of Bloor's academy. Charlie learns that Henry is his long lost cousin and agrees to help him. By the end, after enduring many hardships and leaping over many obstacles, Henry is reunited with his family in the present world and he stays there. (416/416)… (more)
LibraryThing member bplteen
Review by: Matthew

The story begins with a discription of The Red King, a magical king that ruled the continent of Africa. He had left Africa with three leopards for a long trip, but never came back. He had seven decendants, known as "The Endowed". Our protagonist, Charlie Bone, is one of the Endowed.He goes to Bloor's Academy, a school that knows of the Endowed. He has the power to hear and talk to paintings and other art. When his great great granduncle, Henry, comes from the year 1913 and lost from home, Charlie, with the time twister, a small marble-like artifact that can travel through time, must help Henry return to his time and home.

Good… (more)
LibraryThing member liga1996
this is a very fun book even for girls. when i was reading this i felt like i was in a mystical world trying to find out the mystery. its kind of like hair potter but i say better and shorter.
LibraryThing member msampsel
In this second book about Charlie and all of his friends, they are trying to send back someone to the time where they actually belong.
LibraryThing member AmphipodGirl
This series is still totally not Harry Potter. A Time Twister is nothing like a Time Turner.

Ok, I like to snark on these books, but I'm enjoying them enough that I got the next 3 volumes from the library yesterday.
LibraryThing member Shahnareads
I bought it cause it looked like a Harry Potter knock off.
It's pretty funny.

I liked it. I read it a long time ago, so I don't remember everything.
LibraryThing member Cheryl_in_CC_NV
Is this series going anywhere? My son highly recommends it, but so far it's doing nothing for me....
LibraryThing member benuathanasia
So, it's good we get a cast overview at the beginning because WOW does this jump around between a lot of different characters.
LibraryThing member drebbles
It's the year 1916 and Henry and James Yewbeam have been sent to live at Bloor's Academy with their Uncle Gideon Bloor because their sister Daphne has Diphtheria. One day Henry is alone playing marbles when his cousin Zeke rolls a marble known as the "Time Twister" towards him. Henry can't resist the beautiful marble, but when he grabs it, he is propelled almost ninety years into the future. Fortunately, he meets his cousin Charlie Bone who hides him so the Bloor's can't find him. It's not easy, many of the students at Bloor Academy are "endowed" with special powers and some use their powers in malevolent ways. Plus, Charlie's Yewbeam aunts would like to get a hold of Henry. It will take all the efforts of Charlie, his friends, and his Uncle Paton to keep Henry safe.

"Charlie Bone and the Time Twister", the second book in Jenny Nimmo's the Children of the Red King series, is a charming if somewhat derivative book. In the front of book, there is a list of the endowed children at Bloor's Academy and their special powers, which is a useful reference. However, Nimmo can be a bit inconsistent with the powers. For example, Gabriel Silk can feel other people's emotions by touching their clothes, which literally causes him pain at times, yet at other times he casually handles people's clothes with no problem at all. Otherwise, the supernatural elements are nicely done; I especially love the "flames", three seemingly ageless cats, who have a knack of being there when needed. While Nimmo has a good story going on in this series, her writing could be tightened up as she spends too much time telling her readers what is going on instead of letting the action show them. Also, too many times she uses the word famous needlessly, why exactly would gerbils be famous? Henry disappears from the book for long stretches of time; it would have been nice to see more of his side of things. Nimmo does have a nice sense of humor in the book and I loved the word play: Tancred Torsson, who has the ability to create storms, lives in Thunder House on Hail Road.

"Charlie Bone and the Time Twister" is good fun for young and old alike, but children may enjoy it more as adults might like a deeper read.… (more)
Fewer