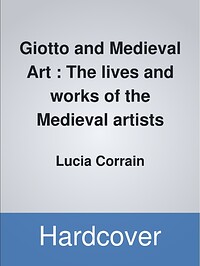 Giotto and Medieval Art : The lives and works of the Medieval artists

Master painter, architect and sculptor, Giotto revolutionized the medieval art world. The late 13th and early 14th centuries was a time of magnificent architectural and artistic expression and Giotto played a pivotal role during this exciting era. Experimenting with new techniques in panel painting and fresco, his work became highly influential in his own day, as well as a source of inspiration to the artists of the Italian Renaissance. This book follows Giotto's entire career, beginning with his training in Florence in the workshop of Cimabue, and introduces and illustrates the artists, works and creative techniques of 14th century Italy.