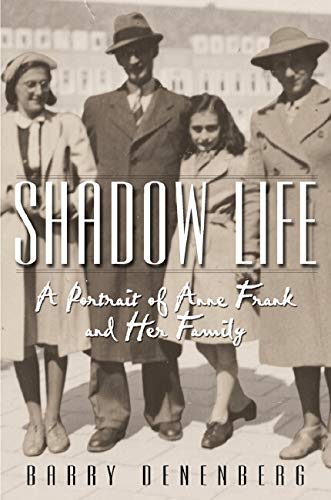 Shadow Life: A Portrait of Anne Frank and Her Family

Denenberg presents the complete story of Anne Frank and her family's life, from Frankfurt, Germany, where Anne and Margot were born before the war, up through to their murders at the Bergen-Belsen concentration camp. When the Franks leave Frankfurt for Amsterdam, they are hoping to find a place where they can resume a normal life, but instead, the family's freedoms are taken away bit by bit. But it is when they see that other Jews are being taken away, and sent to so-called labor camps that the Franks realize they have no choice but to go into hiding; they live in fear for 2 years.

LibraryThing member JulieBaugh
This book contains both Anne's diary proper, plus additional material she wrote, hoping it would be published as part of a collection of experiences of people who had gone into hiding. It also explains her background and what happened to her and her family after they were discovered and arrested, via eyewitnesses who encountered them.

After watching the 2009 TV dramatisation of Anne's life in hiding,I decided to read the book. It was poignant to read of her experiences and hopes, whilst knowing her fate. It is an involving and interesting account, and something that is undoubtedly valuable to historians. What happened to her is unimaginable nowadays in Europe,and yet occured within living memory. Anne's diary stands as an important testament to why such persecution was so terrible. This book, by including the accounts of her life afterwards, makes it all the more so. Incidentally, I felt that the TV series seemed to be a good interpretation of Anne's experiences.… (more)
1 more
LibraryThing member edspicer
This book is very specific and gives you good information of what the Holocaust was like and how a Jewish family could try to survive during it. 5Q4P The cover art is okay and I'd recommend this to high school students and adults. I chose to read this book because I am very interested in Anne Frank and her family's life. TylerS… (more)
Fewer

Anne Frank: Beyond the Diary - A Photographic Remembrance by Ruud van der Rol
Hana's Suitcase: A True Story by Karen Levine
The Diary of a Young Girl: The Definitive Edition by Anne Frank
Anne Frank: The Diary of a Young Girl by Anne Frank
Ruth Bader Ginsburg (Women of Achievement) by Linda N. Bayer
3 more
Victory or Death!: Stories of the American Revolution by Doreen Rappaport
My Bridges of Hope by Livia Bitton-Jackson
Jane Addams: Champion of Democracy by Dennis Brindell Fradin
Fewer