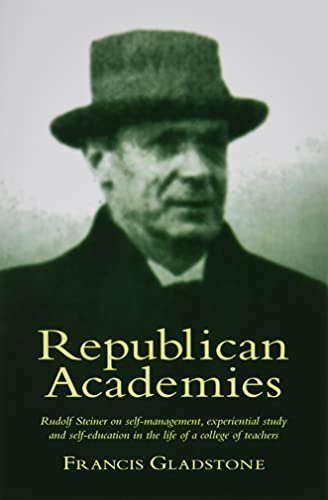 Republican Academies: Rudolf Steiner on self-management, experiential study and self-education in the life of a college of teachers

Does the collapse of communism leave 'welfare capitalism' as the only rational way to organize a society? Not for Rudolf Steiner. Already in the 1920s this unconventional Austrian philosopher insisted that it is not enough to recognize that government-planned economies don't work-centralized control of education is just as counter-productive. Steiner's attempts to win support for a constitutional separation of economic, political and cultural activity proved unsuccessful. But his practical experiment in republican self-management-the Stuttgart Waldorf School-did survive and it inspired the foundation of many other schools along the same lines. Today there are hundreds of Waldorf schools in Europe, America and elsewhere. And very few of them have a head teacher or any permanent management hierarchy. Waldorf schools are not always the 'models of harmonious co-operation' that Steiner hoped for. Republican self-management in schools, he ceaselessly points out, not only depends on experiential study-a continuous sharing of classroom experience based on a common understanding of child development. It also requires teachers who persevere with the self-education necessary for social harmony. And these are difficult challenges. But the Waldorf school movement does carry forward nearly a century's experience of co-operative working-experience that will become increasingly significant as the search for alternatives to 'welfare capitalism' becomes increasingly urgent. Hence Steiner's often colorful advice on how to build forms that can liberate human creativity remains as relevant today as it was in the 1920s. Because Steiner's insights are scattered in many different publications, it can be difficult to gain a clear and balanced picture of his views on the organization of schools and other cultural institutions. Gathering together these insights in one place, Republican Academies reveals a consistent and coherent philosophy of co-operation and self-management.… (more)