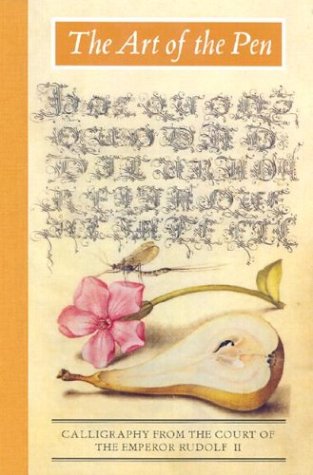 The Art of the Pen: Calligraphy from the Court of the Emperor Rudolf II

The court of Holy Roman Emperor Rudolf II produced nothing more amazing than the Mira colligrophioe monumenta, a flamboyant demonstration of two arts-calligraphy and miniature painting. The project began when Rudolf's predecessor commissioned the master calligrapher Georg Bocskay to create a model book of calligraphy. A preeminent scribe, Bocskay assembled a vast selection of contemporary and historic scripts. Many were intended not for practical use but for virtuosic display. Years later, at Rudolf's behest, court artist Joris Hoefnagel filled the spaces on each manuscript page with images of fruit, flowers, insects, and other natural minutiae. The combination of word and images is rare and, on its tiny scale, constitutes one of the marvels of the Central European Renaissance. The manuscript is now in the collections of the Getty Museum. Forty-eight of its pages are reproduced in this book, containing samples of classic italic hands; historical, invented, and exhibition hands; Rotunda, a classicizing humanist script based on Carolingian miniscule; classically based scripts; and Gothic blackletter and chancery.… (more)

LibraryThing member chellerystick
This tiny volume includes full color reproductions from the longer (and much more expensive) [Mira calligraphiae monumenta], a state-of-the-art of calligraphy from the 1500's. I found this volume interesting to look at, but for me it didn't spark much--there was a lot of focus on the drawings and not so much on the alphabetical variations. I may get the illuminated abecedarium also excerpted from the Mira, as it may have other things of interest to me. Or maybe I will track down a copy of the full Mira that I can page through and decide whether I can budget for it.… (more)
1 more
LibraryThing member wiccked
Totally gorgeous! I can't imagine the time it must have taken to produce such works.
Fewer

The Illuminated Alphabet by Patricia Seligman