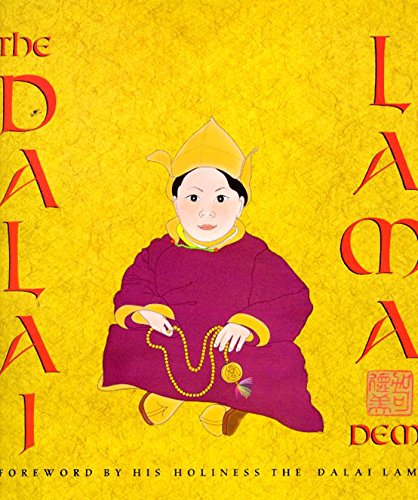 Included is a foreword written by The Dalai Lama. When the thirteenth Dalai Lama died in 1933, the highest holy men in Tibet searched throughout the land for his successor. They were spiritually guided to the humble dwelling of a loving family high in the Himalayas. When the search party greeted the youngest son, the child told them, "Now I am going home!" At last the fourteenth Dalai Lama had been found, and at the age of two, the young boy was taken to the capital city, Lhasa, where he began his training to become the spiritual leader of Tibet. The work of the Dalai Lama and the fate of Tibet are topics of evergrowing international focus. In simple language and glorious art, Demi pays tribute to the fourteenth Dalai Lama's remarkable life. She captures the beauty of Tibetan culture, as well as the charm, talent, and vision of one of the world's best-known spiritual figures.… (more)

LibraryThing member ingahatch
In the buddist religion the highest reglious authority is the Dalai Lama. When the thirteenth died in 1933 the other lamas went in search of the fourteenth. In the buddist religion they beleive in reincarination and that the new Dalai Lama would be reveiled through a series of visions and tests. They did find him in a small village at the age of two. Lhamo soon passed each test and fulfilled each vision that they named him the next Dalai Lama. He traveled back to Lhasa with his family and began education on various subjects in order for him to take over being the religious and political leader of Tibet. When he was fifteen he was finally named the leader but also that year the Chinese communist imposed control over Tibet. In nineteen fifty-nine he had to flee his own country to India in hopes of preserving some Tibetan culture. In nineteen-eighty-nine the Dalai Lama received the Nobel Peace Prize for his efforts of peace and harmony on earth.

I felt this was a great introductory book on a different religion. It was simple and coverd the basics of the religion.

Some extra activities that a class could do would be to find Tibet and India on a map. And also look more into the detail where the Dalai Lama has traveled to spread his ideas of peace and harmony.… (more)
4 more
LibraryThing member JanaRose1
Demi outlines the story of the fourteenth Dalai Lama, or spiritual leader, of Tibet. Tibetans believe that the new Dalai Lama is a reincarnation of the previous. Therefore, the story begins with the death of the thirteenth Dalai Lama and the search for his predecessor. Once the new child was discovered, the monks put him through several tests to determine if he was in fact the reincarnated Tibetan leader. Beautifully written and illustrated, the book chronicles his early life and exile in India. Additionally, it includes a letter from the Dalai Lama which reinforces his dream for Tibet of freedom, peace and happiness. Overall, the book is very informative, yet easy to read and understand.… (more)
LibraryThing member CLDoyle
Appropriate grade level for this book would be2nd grade through 5th grade This book hasn't received any awards. This book is about Tibet men who searched throughout the land for the 13th Dalai Lama's successor after her died. They were spiritually guided to the humble dwelling of a loving family high in the Himilayas. Soon enough, they found the 14th Dalai Lama. This book is a tribute to the 14th Dalai Lama and and his remarkable life, capturing the beauty of the Tibetan culture as well as charm, talent and vision. Uses in the classroom for this book would be to have the students do a project on religious figures in our world. They will then provide a list of their potential figures that they may want to use. They will then make a poster including pictures, dates and important facts about the person.… (more)
LibraryThing member Jmoreeda
I used this book in my classroom as an example of a children's picture book that explained a world religion. (The students were each assigned a religion native to India for which they will create a children's picture book.)

I chose this book as an example because it focused on one aspect of the Buddhist religion rather than attempting to explain the entire rich history in one short picture book. The illustrations are focused and intriguing;although, they are not as detailed as this author's book on Muhammad. Unfortunately, this text does not include a bibliography. Naturally, the class discussed the value that a works cited or bibliography would have added to the book.… (more)
LibraryThing member mferaci
The Dalai Lama tells the life story of the fourteenth Dalai Lama. The book begins with the death of the thirteenth Dalai Lama and the search for the next. It continues on explaining the life of the Dalai Lama, the education he received, and the role he plays in the Buddhist faith. I really enjoyed this book and felt like it was very informative. I felt like it gave an outsider a great look into what Buddhism is like and who the Dalai Lama is. I also liked how the author explained the struggle facing the people of Tibet.… (more)
Fewer

Prince Siddhartha: The Story of Buddha (Wisdom Children's Book) by Jonathan Landaw
Muhammad by Demi
Gandhi by Demi
Buddha Stories by Demi
Su Dongpo: Chinese Genius by Demi
10 more
The Legend of Lao Tzu and the Tao Te Ching by Demi
Jesus : based on the King James version of the Holy Bible by Demi.,
Kites by DEMI DEMI
Confucius: The Golden Rule by Russell Freedman
The Empty Pot by Demi
Ramadan by Suhaib Hamid Ghazi
Buddhist Tales (Barefoot Books) by Sherab Chodzin
The Legend of Saint Nicholas by Demi
One Grain Of Rice: A Mathematical Folktale by Demi
A Faith Like Mine by Laura Buller
Fewer