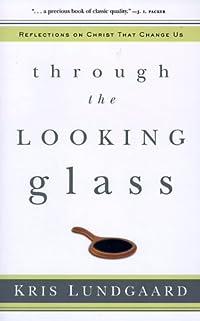 Through The Looking Glass : Reflections On Christ That Change Us

What makes your favorite hero shine in your eyes? Is it the courage of Indiana Jones swinging down into the snake-filled Well of the Souls? Is it the strength of Superman bringing to a screeching halt a locomotive that is bearing down on Lois and Jimmy? Is it the nobility of Shakespeare's Henry V inspiring his sorely outnumbered troops before the battle of Agincourt? Is it the wits of Sherlock Holmes dogging the trail of arch-villain Moriarty? Or is it the combination of fearlessness, muscle, dignity, and brains in Doc Savage, the consummate superhero?Whatever heroic traits pop into your mind, I suspect that obedience and suffering aren't among them. Yet it's in his obedience to God's law and his suffering the curse of that law for us that we see Christ as our conquering Hero.… (more)

Through The Looking Glass : Reflections On Christ That Change Us by Kris Lundgaard, 1958- (Paper Book)

The Enemy Within : Straight talk about the power and defeat of sin by Kris Lundgaard
Each for the Other : marriage as it's meant to be by Bryan Chapell
DIscipline of grace, The : God's role and our role in the pursuit of holiness by Jerry Bridges
Thought of God, The by Maurice Roberts
Living In The Gap Between Promise And Reality : The Gospel According To Abraham by Iain M. Duguid
16 more
Ministries of mercy : the call of the Jericho road by Timothy J. Keller, 1950-
War Of Words : Getting To The Heart Of Your Communication Struggles by Paul David Tripp, 1950-
Israel of God, The : Yesterday, Today, and Tomorrow by O. Palmer Robertson
Addictions : a banquet in the grave : finding hope in the power of the Gospel by Edward T. Welch, 1953-
The Shadow of the Cross: Studies in Self Denial by Walter J. Chantry
Children Of The Living God: Delighting in the Father's Love by Sinclair B. Ferguson
Holiness : Its Nature, Hindrances, Difficulties, & Roots by J. C. Ryle
Transforming grace : living confidently in God's unfailing love by Jerry Bridges
Putting Amazing Back Into Grace : Embracing The Heart Of The Gospel by Michael Scott Horton
Tell The Truth : The Whole Gospel To The Whole Person By Whole People : A Training Manual On The Message And Method Of God-Centered Witnessing To A Grace-Centered Gospel by Will Metzger, 1940-
Women's Ministry In The Local Church by J. Ligon Duncan, 1960-
Communion of saints, The : living in fellowship with the people of God by Philip Graham Ryken, 1966-
Shepherd Leader, The : Achieving Effective Shepherding In Your Church by Timothy Z. Witmer, 1953-
Sovereignty of God, The by A. W. Pink
Importance of the Local Church, The by Daniel E. Wray
Christian Life, The : A Doctrinal Introduction by Sinclair B. Ferguson
Fewer