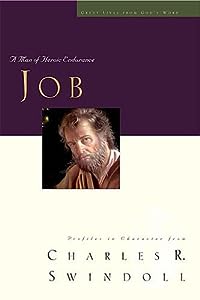 Job A Man of Colossal Faith in the Face of Overwhelming Tragedy Job, a study in pathetic tragedy . . . a hapless victim of unfair treatment. His disastrous circumstances overwhelmed him. His boil-covered body tormented him. His so-called friends belittled him. His distraught wife discouraged him. Even God seemed to desert him'letting Satan have his devilish way. And Job sat patiently by, enduring it all. Not a portrait of a hero. Or is it? Could a man with ordinary internal fortitude stay faithful as Job did? Could a wimp endure the excruciating pain, suffering, and loss that this man did? No hero? Think again. After a year of focused research into the life of Job, Charles Swindoll says, "Job appears boldly in the ancient book of the Bible that bears his name, and yet most of us have not taken the time to examine his life in depth. But a careful study of Job's life will convince us that this is another of God's amazing men with heroic character qualities worth emulating." Travel with Swindoll into the world of Job: A Man of Heroic Endurance. "Even if it was written in Scripture long ago, you can be sure it's written for us." So pay close attention to Job's life. Who knows what God will do next in your life?… (more)

The mystery of God's will : what does He want for me? by Charles R. Swindoll
Heaven by Randy Alcorn
The great house of God by Max Lucado
A love worth giving : living in the overflow of God's love by Max Lucado