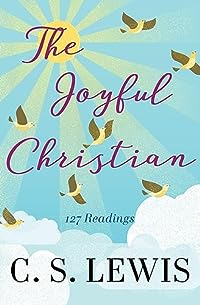 An anthology of more than 100 selections from the writings of an influential and popular English theologian and author. Clive Staples Lewis (1898-1963) was one of the intellectual giants of the twentieth century and arguably one of the most influential writers of his day. He was a Fellow and Tutor in English Literature at Oxford University until 1954, when he was unanimously elected to the Chair of Medieval and Renaissance Literature at Cambridge University, a position he held until his retirement. He wrote more than thirty books, allowing him to reach a vast audience, and his works continue to attract thousands of new readers every year. His most distinguished and popular accomplishments include Mere Christianity, Out of the Silent Planet, The Great Divorce, The Screwtape Letters, and the universally acknowledged classics The Chronicles of Narnia. To date, the Narnia books have sold over 100 million copies and been transformed into three major motion pictures.… (more)

LibraryThing member tim.sherrod
the joyful christian is a collection of some of lewis' beliefs towards certain issues. 127 to be exact. i suppose it would be better to just read lewis' books and get his views from those which would naturally be more thorough and would possibly give explantions and reasons for his specific views.
Show More
not recommended.
Show Less
1 more
LibraryThing member enigmaticblue
A nice collection of Lewis' thoughts on various matters, but I recommend getting the books themselves.
Fewer

Surprised by Joy: The Shape of My Early Life by C. S. Lewis
Problem of Pain by C S Lewis
The pilgrim's regress : an allegorical apology for Christianity, reason, and romanticism by C. S. Lewis
Mere Christianity : a revised and amplified edition, with a new introduction, of the three books, Broadcast talks, Christian behaviour, and Beyond personality by C. S. Lewis
The great divorce : a dream by C. S. Lewis
7 more
The cost of discipleship by Dietrich Bonhoeffer
Celebration of discipline : the path to spiritual growth by Richard J. Foster
The abolition of man, or, Reflections on education with special reference to the teaching of English in the upper forms of schools by C. S. Lewis
Knowing God by J. I. Packer
Reaching out : the three movements of the spiritual life by Henri J. M. Nouwen
Life together by Dietrich Bonhoeffer
My Utmost for His Highest (Classic Edition) by Oswald Chambers
Fewer