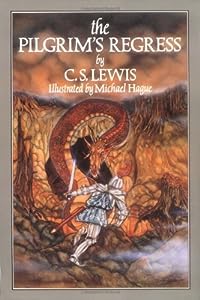 The pilgrim's regress : an allegorical apology for Christianity, reason, and romanticism

The first book written by C.S. Lewis after his conversion, The Pilgrim's Regress is, in a sense, a record of Lewis's own search for meaning and spiritual satisfaction that eventually led him to Christianity. It is the story of John and his odyssey to an enchanting island that has created in him an intense longing, a mysterious, sweet desire. John's pursuit of this desire takes him through adventures with such people as Mr. Enlightenment, Media Halfways, Mr. Mammon, Mother Kirk, Mr. Sensible, and Mr. Humanist and through such cities as Thrill and Eschropolis, as well as the Valley of Humiliation. Though the dragons and giants here are different from those in Bunyan's The Pilgrim's Progress, Lewis's allegory performs the same function of enabling the author to say in fable form what would otherwise have demanded a full-length philosophy of religion.… (more)

LibraryThing member atimco
The Pilgrim's Regress, first published in 1933, was C. S. Lewis's first book after becoming a Christian. It is a fiercely personal allegory of one man's search for the beauty he glimpses faintly from a far distance. The longing for this beauty is a dreadful, consuming thing, and yet no one who has experienced it would give it up.

As a boy, John lives among a people who fear the Landlord and his list of rules, enforced by the Stewards. One day the lease is up for John's uncle George and he has to go meet the Landlord face to face. They never see him again, and John never forgets the terror of that moment when his uncle's mask slips. John, brought up in these narrow ways, longs for the beauty he sees far in the distance: an Island with a many-turreted castle. He disobeys the rules and goes into the forbidden forest, and eventually sets out on his own to travel the wide world. He starts out with nothing but his desire, and though he meets with many strange folk and learns of many ideas and theologies, never is that piercing hunger satisfied.

Like its great model, The Pilgrim's Progress, this book features a cast of characters named for their defining trait: Virtue, Wisdom, Mr Sensible, Enlightenment, Halfways, Reason, Contemplation, Humanist, Broad, etc. While John Bunyan's tale focuses mainly on Christian's journey through life as a believer, Lewis's story goes a little further back and tells of the journey to even reach the point of conversion.

It is fascinating to trace the ideas here that develop in Lewis's later books. The idea of masks that everyone wears in John's home country, for example, reminds me so much of the veil Orual wears in Till We Have Faces. Or the dragon John must fight at the end, the clothes he must tear off to make the dive into the pool—I couldn't help but think of Eustace in The Voyage of the Dawn Treader. And there are so many other later themes and ideas that are hinted at here.

Why is this such a personal story? The last Lewis title I read was Surprised By Joy, where he describes his journey to conversion and the sweet and terrible desire for Joy that led him on and finally broke down his resistance. When he fights against Reason, her sword against his neck, his thought of pushing her off the precipice but knowing he would fall with her—it reads so strongly in light of Lewis's own experiences. The book is replete with quotations and allusions from classical literature and Scripture; it is as if all of it came alive and fit itself together for him once he surrendered to the Landlord.

All the same, I cannot help but note the focus on John's heroics and efforts, with the Landlord cast as a background figure—behind everything, sure, but secondary to the experiences of John. It is not an inaccurate picture of our experience, perhaps, but it certainly is not the whole story. Though a slim little volume, this packs a punch. In the foreword Lewis admits that in some places he lost his temper. It is fairly clear that he has specific individuals in mind in certain caricatures.

I did not read this quickly; it wanted thinking about, and I'm sure I didn't grasp the half of what he is saying. But his prose is always a pleasure to read, even when it's drawing from deep philosophical wells I'm not sure I fathom. What a pen the man had.

Has not every object which fancy and sense suggested for the desire, proved a failure, confessed itself, after trial, not to be what you wanted? Have you not found by elimination that this desire is the perilous siege in which only One can sit?… (more)
7 more
LibraryThing member jjvors
In some ways this is a double allegory; it is an allegory of C.S. Lewis' spiritual journey to Christianity and it is an allusive allegory to Bunyan's Pilgrim's Progress. Whereas Bunyan's book shows a steady, if slow, march to conversion and faith in God, C.S. shows he started in a Christian home, move far away to agnosticism and atheism and then returned to Christianity.

Given knowledge of Bunyan's book and the facts of Lewis' life and conversion, the allegory is understandable; without this, the book would be confusing and meaningless. With the keys to the allegory, the book is entertaining and clever; without the keys the reader is left wondering what all the symbols mean. With the background information, one can glean Lewis' view of the Church of England, agnosticism, atheism, and other philosophies. I recommend reading a biography of Lewis, even his Wikipedia article before you read this book.

I only give the book three stars, average, because its appeal is so narrow. Yet because Lewis is such a towering literary, philosophical, and Christian figure, it will have enduring value.… (more)
LibraryThing member antiquary
I find this both stimulating for its ideas and
interesting for its imagery. I often ask myself
whether I am more Mr. Broad or Mr. Angular.
LibraryThing member ToDieToTruth
An autobiographical, alligorical tale of one man's philosophical journy through life. Told with a painful honesty about his frailty.
LibraryThing member revslick
great review of CS Lewis' experiences and thoughts with the things that lead us away from Christianity. With each one there is found lacking substance. for me my favorite piece in the book is the discussion with the Hermit and the afterword by Lewis.
LibraryThing member davegregg
This is a very meaningful story. I enjoyed it thoroughly and intend to read it again.
LibraryThing member SueinCyprus
Allegory similar in style to Pilgrim's Progress, although the language is much less dated. A little obscure in places but worth reading nonetheless. Lewis's philosophy of life is shown clearly by the people his hero meets and talks to.
LibraryThing member Hamburgerclan
This is an echo of Bunyan's Pilgrim's Progress, an early 20th Century allegory of a soul's journey through the spiritual dangers of the world to the eternal paradise of Heaven. It was a bit more readable than Bunyan's tale, but still a bit over my head. Mr. Lewis was and is quite more literate than I. Another stumbling block is that the story reflects the intellectual and philosophical world of the 1920s and 1930s. Would the tale be written today, I'm sure the characters would have to be changed. Or maybe not. Either way, it made for an interesting read.
--J.… (more)
Fewer