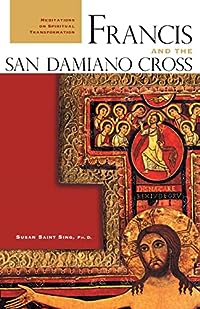 Francis and the San Damiano Cross: Meditations on Spiritual Transformation

The San Damiano crucifix is a stage where a story is being told. There are different sets and players on the stage and we are the audience viewing it; and it too has an audience upon it that is both viewing the crucifixion and playing a part in it....Francis walked onto that stage a person who had within him the violence of war, unrest and severe doubts. And on this stage he became a person of peace. His prayer before the crucifix is also our prayer, 'What will be ours to be and do'? --from the Introduction Francis and the San Damiano Cross: Meditations on Spiritual Transformation is an invaluable prayer resource that uses the cross of San Damiano--the cross that spoke to Francis of Assisi--as inspiration for personal reflection. Susan Saint Sing, a former resident of Assisi and follower of Francis, takes the reader on a journey to the place where Francis prayed before the San Damiano Cross. Not only does she recall her own personal journey to Assisi, she recounts the spiritual and physical transformation of Francis in his quest to "rebuild" the Church--a quest that began in the small, broken-down church of San Damiano but was the catalyst for a much broader reconstruction. These meditations not only detail and explain the images on the cross itself, but they explain the powerful message of the cross--transformation: "It speaks to us still, beckoning us to repair our lives, our relationships, our failings--in honor of Him who gave his life there on the cross in order for us to become more in the fullness of his presence, to be instruments of peace. Christ's death and resurrection, celebrated on this gilded cross is a call to each of us, like it was to Francis, to become great through Him. We are called to live like Francis, to be like him and to be transformed."… (more)

Saint Francis of Assisi (Paraclete Heritage Edition) by G. K. Chesterton
Francis: The Journey and the Dream by Murray Bodo O. F. M. M.
Francis & His Brothers : A Popular History of the Franciscan Friars by Dominic Monti
Clare of Assisi by Ilia Delio
Francis and Clare: The Complete Works (Classics of Western Spirituality (Paperback)) (English and Latin Edition) by Clare of Assisi Francis of Assisi
12 more
The Little Flowers of Saint Francis by Raphael Brown
Francis: A Saint's Way by James Cowan
St. Francis of Assisi: A Biography by Omer Englebert
The Life of St. Francis of Assisi : From the "Legenda Sancti Francisci" by Saint Bonaventure
Saint Clare: Beyond the Legend by Marco Bartoli
God's Fool: The Life of Francis of Assisi by Julien Green
Clare: Her Light and Her Song by Mary Seraphim
Day by Day with Followers of Francis & Clare by Pat McCloskey
Francis Of Assisi: Writer And Spiritual Master
St. Francis and the Cross: Reflections on Suffering, Weakness, and Joy by Raniero Cantalamessa
Praying with Francis of Assisi by Joseph Stoutzenberger
Tales of St. Francis: Ancient Stories for Contemporary Living by Murray Bodo
Fewer