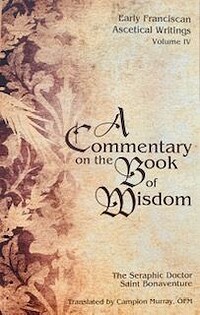 A Commentary on the Book of Wisdom by Saint Bonaventure. Translated by Campion Murray, OFM. Volume IV of a 12 Volume set. Fr. Campion Murray, OFM, Lector Emeritus of the Yarra Theological Union and Fellow of the Melbourne College of Divinity, lives at St. Paschal's College, a Franciscan Friary in Box Hill, a suburb of Melbourne, Victoria. Part of the college forms the campus of YTU where Campion was a faculty member from its inception and twice elected President of the Theological Union. His two terms of office helped consolidate YTU and its ecumenical openness. Fr. Campion made his final profession in the Province of the Holy Spirit, Australia in 1948 and was ordained priest in July 1951. After studies at the Athenaeum Antonianum, Rome in the field of systematic theology, he has for the many years following, been an inspiring teacher and shepherd to many students, lecturing especially in the field of Wisdom Literature.Translations of early Franciscan works have been for many years a vital interest in his life. This present series, Early Franciscan Ascetical Writings, represents only a small part of the body of works that this great scholar has translated, among them St. Bonaventure's Commentary on Ecclesiastes, Franciscan Institute, Saint Bonaventure, NY, 2005.… (more)