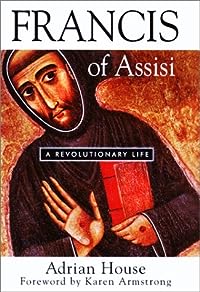 Francis of Assisi: A Revolutionary Life

Francis of Assisi (1182-1226) was the least dogmatic of saints, seeing himself as God's troubadour or fool. His life was a rich succession of dramas. After his debauchery as a young playboy, merchant and soldier, he devoted his life to the poor and sick. In 1224, marks similar to Christ's wounds appeared on his hands, feet and side, the first recorded case of the stigmata. Today, nearly three million people a year visit his tomb in Assisi.

LibraryThing member Michael_Godfrey
House writes sympathetically of his subject, but could have done with good editor. Too often he makes sudden and rather tenuous connections between Francis' life and the lives of other historical figures, and sometimes lapses into awkward repetition of ground already covered - material on p. 274
Show More
comparing Francis' self-discipline and mortification to Zen and martial arts disciplines has been aired eleven pages earlier.

Francis of Assisi: A Revolutionary Life by Adrian House (Paperback)