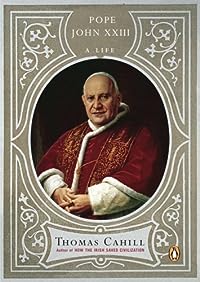 Angelo Guiseppe Roncalli was an unexpected choice to follow the ultra conservative Pope Pius XII in 1958. At seventy-six years old, 'a fat old man with twinkling eyes and a seductively resonant voice', neither a well-known public figure nor a highly trained theologian, he was at first regarded as a transitional pope. During his brief but unforgettable reign as Pope John XXIII, however, he astonished the world with the seminal and unprecedented change he brought about in the Catholic Church. He was a deeply political man and played an important part on the world stage, helping to defuse the Cuban missile crisis of 1963. He also rewrote litury to avoid any crude condemnation of the Jews, tens of thousands of whom he had saved from the Holocaust when he was an apostolic administrator in Turkey.… (more)

LibraryThing member solla
I decided I wanted to read it when Cahill referenced it in the last book I read by him, Mysteries of the Middle Ages : the rise of feminism, science, and art from the cults of Catholic Europe. In that book, (and this one), he says some pretty harsh things about popes, and I wanted to see what he
Show More
had to say about Pope John XXIII.

I was 11 and attending Catholic school when the first phase of the Ecumenical Council was going on, so I heard about it, though not in great detail - mostly, I recall, in terms of a re-approachment of Roman Catholic and Greek Orthadox, and in more openness towards Protestant religions. After sixth grade, I was not in Catholic school again, and I don't remember any mention of the continuing council in CCD (Saturday religion) classes. I didn't realize all the preparation for the council, and that Pope John the XXIII barely had a change to participate since he died after the first session.

I enjoyed this book for a lot of reason, one being the view of church politics John (called Angelo early in the book, and then Roncalli later before becoming pope) developed within. This included the very repressive regime of Pius X. Cahill obviously has a lot of respect for John, and he shows his seeming slow development of his philosophy, alongside an always present humanness and compassion for and openness to others. During World War II, Paul was in Turkey, and it was his reaching out to others who might be seen as enemies that allowed him to get the help of the German ambassador in smuggling out thousands of Jews from Europe. It also helped him get Khrushchev's cooperation for Russian Orthodox bishops being able to attend the ecumenical council.

The also helped me appreciate just how remarkable the ecumenical council was in the context of the church, for it was the first time, in a long time, that there was a meeting of bishops that had not been pre-scripted.

In his encyclical Pacem in Terris - Peace on Earth - John gave three reasons for feeling hopeful about the direction of humanity. He says that he sees everywhere signs of a heightened appreciation of human dignity, especially in three areas "a progressive improvement in the economic and social conditions of workers", "the part women are now playing in political life everywhere" and their "increasing awareness of their natural dignity"; and the demise of imperialism, which "is fast becoming an anachronism." (I'm quoting Cahill here, who is quoting the encyclical).

Of course, this progress that John XXIII saw is uneven and easy for us to despair about, so it is helpful to know that he saw it so clearly. To give it some perspective I am also reading a book about the spice trade. I am in the part of the book where De Gama, first, and then other Portuguese, sail around Africa and reach India and the islands nearby, Sumatra, Java. Basically, they are ready to take control by force, and they deal extremely harshly with anyone who opposes them, however mildly, and with many innocent bystanders. By harshly I mean slicing off the hands, ears and noses of some, and then setting them adrift in a burning boat, or burning up a ship of 800 Muslim pilgrims who had done nothing to them. Perhaps we have evolved a bit since then.
Show Less
2 more
LibraryThing member julsitos2
Though the history is interesting, the writing is highly slanted and one-sided.
LibraryThing member RGKronschnabel
Excellent book on Papal Politics and the Politics of the 20th and 21st century
church
Fewer

My Life with the Saints by James Martin
Saint Augustine: A Penguin Life (Penguin Lives) by Garry Wills
The Joy of the Gospel (Specially Priced Hardcover Edition): Evangelii Gaudium by Pope Francis