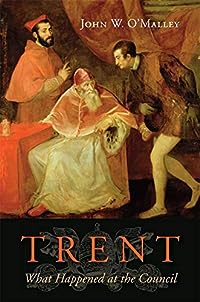 Trent: What Happened at the Council

The Council of Trent (1545-1563), the Catholic Church's attempt to put its house in order in response to the Protestant Reformation, has long been praised and blamed for things it never did. Now, in this first full one-volume history in modern times, John W. O'Malley brings to life the volatile issues that pushed several Holy Roman emperors, kings and queens of France, and five popes--and all of Europe with them--repeatedly to the brink of disaster. During the council's eighteen years, war and threat of war among the key players, as well as the Ottoman Turks' onslaught against Christendom, turned the council into a perilous enterprise. Its leaders declined to make a pronouncement on war against infidels, but Trent's most glaring and ironic silence was on the authority of the papacy itself. The popes, who reigned as Italian monarchs while serving as pastors, did everything in their power to keep papal reform out of the council's hands--and their power was considerable. O'Malley shows how the council pursued its contentious parallel agenda of reforming the Church while simultaneously asserting Catholic doctrine. Like What Happened at Vatican II, O'Malley's Trent: What Happened at the Council strips mythology from historical truth while providing a clear, concise, and fascinating account of a pivotal episode in Church history. In celebration of the 450th anniversary of the council's closing, it sets the record straight about the much misunderstood failures and achievements of this critical moment in European history.… (more)

What Happened at Vatican II by John W. O'Malley