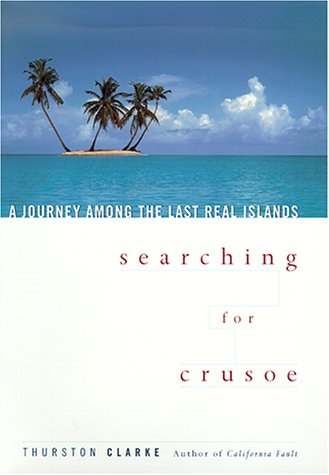 Searching for Crusoe: A Journey Among the Last Real Islands

They inspire feelings of great passion, serenity, and sometimes fear . . . they give people the opportunity to find themselves--or to lose their minds . . . they are revered as paradise or treated as junkyards . . . both haunted by and respectful of history . . . they are central to the myths and religions of many peoples throughout time . . . they provide a real, friendly community or the hell of repetitive social encounters . . . What is it about islands that has captivated millions of people around the world and through the centuries? In a penetrating, brilliantly written book that weaves sociology, history, politics, personality, and ancient and popular culture into one compelling narrative, Thurston Clarke island-hops around the oceans of the world, searching for an explanation for the most passionate and enduring geographic love affair of all time--between humankind and islands. Along the way Clarke visits the remote and silent Mas À Tierra, the island off the coast of Chile that inspired Defoe to write Robinson Crusoe; tropical Banda Neira, one of the Spice Islands, where its self-crowned prince hopes for nothing less than nutmeg's complete and glorious revival; sleepy, simple Campobello, the Canadian island where Franklin D. Roosevelt spent his boyhood summers; Patmos, with its imposing mountaintop monastery; Malekula, once the most notorious cannibal island in the world; and Jura in Scotland's Hebrides, where George Orwell wrote 1984--the island that turned Clarke into a islomane, someone Lawrence Durrell says experiences an "indescribable intoxication" at finding himself in "a little world surrounded by the sea." Despite colonialism and missionary conversions, wartime scars and shrinking coasts, islands have thrived. Though each island is unique in its own way, Clarke discovers that the islanders themselves are a distinct people-- tranquilized by their watery horizons yet sensitive to the first shift in weather, conservative yet more likely to drop their inhibitions because no one is looking. And over every island falls the shadow of Robinson Crusoe, persuading us that islands are more liberating than confining, more contemplative than lonely, more holy than barbaric because we have been "removed from all the wickedness of the world." In a stunning work of wit, adventure, and incisive exploration, Thurston Clarke brings a unique passion to dazzling life.… (more)

LibraryThing member JTJonesberry
Lots of unexpected surprises as the author explores a variety of locations to examine man's love affair with islands. Suggested reading for my friends undersail.
1 more
LibraryThing member untraveller
Mostly a good book although some of the islands I did not really care much about. Twas a good background for Mas a Tierra, the Maldives, and the Spice Islands. Fairly well written as well.
Fewer

In Search Of Robinson Crusoe by Tim Severin
Blue Latitudes: Boldly Going Where Captain Cook Has Gone Before by Tony Horwitz
The Pillars of Hercules: A Grand Tour of the Mediterranean by Paul Theroux
The Kingdom by the Sea: A Journey Around Great Britain by Paul Theroux
Chasing The Monsoon by Alexander Frater
2 more
Terra Incognita: Travels in Antarctica by Sara Wheeler
Hunting Mister Heartbreak: A Discovery of America by Jonathan Raban
Fewer