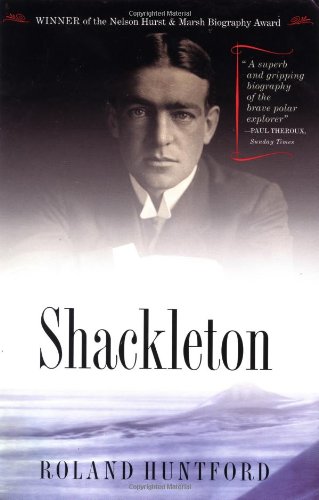 Ernest Shackleton was the quintessential Edwardian hero. A contemporary - and adversary - of Scott, he sailed on the 'Discovery' expedition of 1900, and went on to mount three expeditions of his own. Like Scott, he was a social adventurer; snow and ice held no particular attraction, but the pursuit of wealth, fame and power did. Yet Shackleton, and Anglo-Irishman who left school at 16, needed status to raise money for his own expeditions. At various times he was involved in journalism, politics, manufacturing and City fortune-hunting - none of them very effectively. A frustrated poet, he was never to be successful with money, but he did succeed in marrying it. At his height he was feted as a national hero, knighted by Edward VII, and granted £20,000 by the government for achievements which were, and remain, the very stuff of legend. But the world to which he returned in 1917 after the sensational 'Endurance' expedition did not seem to welcome surviving heroes. Poverty-stricken by the end of the war, he had to pay off his debts through writing and endless lecturing. He finally obtained funds for another expedition, but dies of a heart attack, aged only 47, at it reached South Georgia.… (more)

LibraryThing member bcquinnsmom
When I read this book, I was completely sucked in from page one. It is a most outstanding account not only of Shackleton's ill-fated Endurance expedition, but his earlier attempts to set records in Antarctica. It is a study of the man himself ... how his very character led him to do what he did and keep doing it in the face of tragedy and failure.… (more)
2 more
LibraryThing member pouleroulante
This is another masterpiece from Huntsford. Warts and all. Actually....alot of warts. Interesting detail about his brother (?) and the theft of some major jewels in Ireland. (it is a while since I read it).
LibraryThing member tomsk7
Huntford is a careful, thorough biographer. This is a fascinating book, which explores the relationship between Shackleton's life on and off the ice.
Fewer