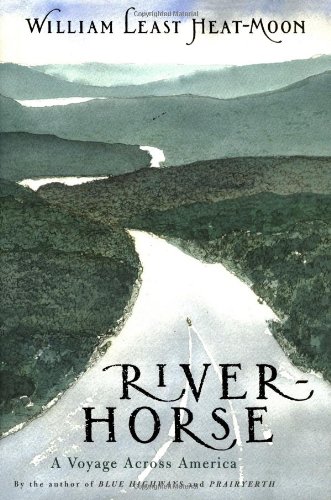 River-Horse: A Voyage Across America

In this abridgement of River-Horse, the pre-eminent chronicler of American back roads -- who has given us the classics Blue Highways and Prairyerth -- recounts his singular voyage through American waters from sea to sea. Along the route, he offers a lyrical and ceaselessly fascinating shipboard perspective on the country and its rivers, lakes, canals, and landscapes. Brimming with history, drama, and wisdom, River-Horse belongs in the pantheon of American travel literature. In his most ambitious journey ever, Heat-Moon sets off aboard a small boat he named Nikawa ("river horse" in Osage) from the Atlantic at New York Harbor in hopes of entering the Pacific near Astoria, Oregon. He and his companion, Pilotis, struggle to cover some five thousand watery miles -- more than any other cross-country river traveler has ever managed -- often following in the wakes of our most famous explores, from Henry Hudson to Lewis and Clark. En route, the voyagers confront massive floods, submerged rocks, dangerous weather, and their own doubts about whether they can complete the trip. But the hard days yield up incomparable pleasures: strangers generous with help and eccentric tales, landscapes unchanged since Sacagawea saw them, riverscapes flowing with a lively past, and the growing belief that efforts to protect our lands and waters are beginning to pay off. And, throughout its course, the expedition enjoys coincidences so breathtaking as to suggest the intervention of a divine and witty Providence. Teeming with humanity and high adventure, Heat-Moon's account is an unsentimental and original arteriogram of our nation at the edge of the Millennium.… (more)

LibraryThing member thorold
This was a chance find in a secondhand bookshop: I didn't know anything about the author, but the idea of travelling across the USA by boat sounded daft enough to make an interesting book, so I thought I'd give it a try. It turns out that William Least Heat Moon is a Great American Individualist in everything including his prose style. He specialises in recycling old words that have lain forgotten in lexicographers’ junk bins since the last time a Victorian poet needed them to make a line scan or an eighteenth-century geographer lost for an English term copied them from a French gazetteer. And he has a very particular way of getting syntax into a state where it always looks subtly wrong, but you can never quite put your finger on why. Apparently he is or was an English professor, which probably explains a lot.

The odd thing is that his strange way of writing, so irritating when you first encounter it, seems to grow on you: after the first three or four chapters, I was really enjoying it. Technically it's terrible, but it has such warmth and energy and personality that, whilst you wouldn't want to play Scrabble with him, you do rather get to like the author, groaning bad-pun-style whenever he comes up with a ridiculously obscure way of saying something very simple.

The boat-trip is quite fun too, and WLHM’s encyclopaedic knowledge of the geography and history of the USA combines very well with his sharp eye for the damage that people have done to its “wilderness” environments.… (more)
3 more
LibraryThing member bherner
I have enjoyed all of Heat Moon's books. This one chronicals a trip from east coast to west coast (almost) completely by river. Very long, but if you have liked others of his, you'll like this one.
LibraryThing member Nero56
An uncommon journey, but an intriguing one. I enjoy all of the references to other authors/philosophers along the way.
LibraryThing member JosephKing6602
Pretty good travel story...but it dragged a bit in spots. The best parts were the descriptions of the 'characters' they met along the way. All things considered, I like BLUE HIGHWAYS a bit more!.
Fewer

Blue Latitudes: Boldly Going Where Captain Cook Has Gone Before by Tony Horwitz
Bad Land: An American Romance by Jonathan Raban
Fresh Air Fiend: Travel Writings by Paul Theroux
On the Rez by Ian Frazier
Lasso the Wind : Away to the New West by Timothy Egan
1 more
My Old Man and the Sea: A Father and Son Sail Around Cape Horn by David Hays
Fewer