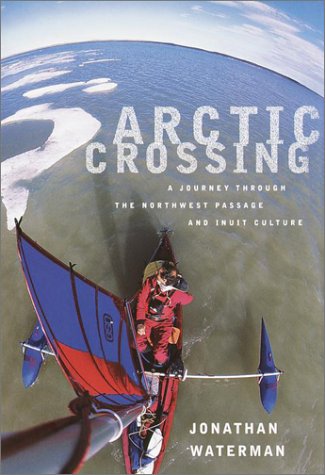 Arctic Crossing: A Journey Through the Northwest Passage and Inuit Culture

The Arctic—with its twenty-four-hour daylight, surprisingly curious animals and inexplicable humming noises—is a world of constant danger and limitless possibility. This unforgiving landscape is home to the Inuit (the name they prefer to “Eskimos”), whose complex and little-studied society is fascinating in its divergence from as well as its assimilation into Western culture. Jonathan Waterman’s 2,200-mile journey across the roof of North America took him through Inuit communities in Alaska to Nunavut, Canada’s new, 770,000-square-mile, self-governed territory. His story, at once illuminating and alarming, offers firsthand observations of their life, language and beliefs; records their reactions to global modernization; documents their centuries of unjust treatment at the hands of Kabloona (bushy-eyebrowed whites); and witnesses unemployment, teen suicide and such persistent plagues as spousal violence and substance abuse. From the perspective of his 1997–1999 voyage—as the Inuit stand on the brink of a more hopeful, independent future—he also looks into a past marked by famous (or infamous) Arctic explorers, government cover-ups and environmental destruction. This beautifully written work of intrepid reporting and even scholarship also reveals the physical risks and psychological perils of crossing the legendary Northwest Passage. Utterly alone for weeks at a time, Waterman struggles against freezing conditions, the tricks played on him by his own mind and dangers more complex than aggressive bears, stormy seas and mosquito blizzards. Following the advice of an Inuit shaman, who said that “those things hidden from others” are discovered only “far from the dwellings of men, through privation and suffering,” Waterman kayaks, skis, dogsleds and sails across the Great Solitudes in a thrilling and ultimately successful quest for this “true wisdom,” arriving at a profound understanding of environment and culture.… (more)

North to the Night: A Spiritual Odyssey in the Arctic by Alvah Simon
On Celtic Tides by Chris Duff
Courting the Diamond Sow : A Whitewater Expedition on Tibet's Forbidden River by Wick Walker
The Seven Mountain-Travel Books by Harold William Tilman
Where Mountains Are Nameless: Passion and Politics in the Arctic National Wildlife Refuge by Jonathan Waterman
1 more
The Natural History of Puget Sound Country (Weyerhaeuser Environmental Books) by Arthur R. Kruckeberg
Fewer