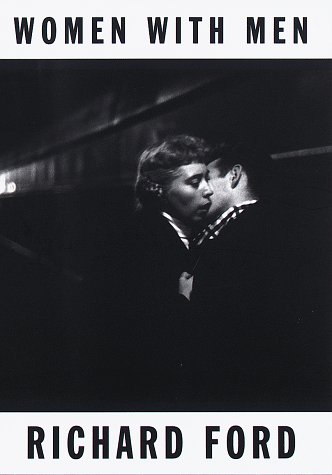 Richard Ford'sIndependence Day--his sequel toThe Sportswriter,and an international bestseller--is the only novel ever to have received both the Pulitzer Prize and the PEN/Faulkner Award. Now, two years later, he reaffirms his mastery of shorter fiction with his first collection since the widely acclaimed Rock Springs, published a decade ago. The landscape ofWomen with Menranges from the northern plains of Montana to the streets of Paris and the suburbs of Chicago, where Mr. Ford's various characters experience the consolations and complications that prevail in matters of passion, romance and love. A seventeen-year-old boy starting adulthood in the shadow of his parents' estrangement, a survivor of three marriages now struggling with cancer, an ostensibly devoted salesman in early middle age, an aspiring writer, a woman scandalously betrayed by her husband--they each of them contend with the vast distances that exist between those who are closest together. Whether alone, long married or newly met, they confront the obscure difference between privacy and intimacy, the fine distinction of pleasing another as opposed to oneself, and a need for reliance that is tempered by fearful vulnerability. In three long stories, Richard Ford captures men and women at this complex and essential moment of truth--in the course of everyday life, or during a bleak Thanksgiving journey, seismic arguments, Christmas abroad, the sudden disappearance of a child, even a barroom shooting. And with peerless emotional nuance and authority he once again demonstrates, as Elizabeth Hardwick has written, "a talent as strong and varied as American fiction has to offer."… (more)

LibraryThing member RandyMetcalfe
The three lengthy short stories in this collection have all the hallmarks of Ford’s early brilliance as well as his middle period introspective anxiety. His writing is never less than compelling, at times thought provoking, and at others unsettling. He has a remarkable ability to turn a story on a dime, either through external events or through misplaced introspection. Yet these shifts never seem extraordinary once they have occurred. The reader just accepts them, possibly even saying to themselves, “that’s what I was expecting all along.” And then another shift takes you off in a different direction.

“Jealous” is set in Montana and feels like an extension of the stories in Ford’s first collection, Rock Springs. The bleak landscape, lives lived on the edge—the edge of despair, alcoholism, and violence—family disruption, and the transition to manhood. It’s all there. Here the narrator, a boy of 17, is a touchstone for the other characters—his father, his aunt, his absent mother. Both a means to highlight their stories and their sadness, and to reflect that back onto the vast emptiness of the prairie.

Depending on the Ford you prefer, “The Womanizer” may appeal more. Here is the Ford of the Frank Bascombe trilogy. In this case, the protagonist is a man in Paris for a few days. He is intelligent, in his way. He is worldly, unafraid to partake of opportunities that arise before him. And he is introspective. Incessantly. Argumentatively. And without any clear grip on reality. It is an enthralling effect. A bit like watching a train wreck in slow motion. And unsettling as well, since introspection is more typically associated (from Socrates to Descartes) with rational thought and behaviour. Here, not so much.

The final story in the collection, “Occidentals”, feels transitional. Again we are in Paris. Again we have the hyper-introspective male protagonist. Again we are on the cusp of something, some kind of transition perhaps heralded by the couple’s hotel being located on the border of a cemetery. And Paris, or at least Ford’s imagined American Paris fully mediated by his character’s encounters with it through literature (the protagonist is a novelist who recently had been a literature professor), is significant. Perhaps Paris plays the role that Canada played in Ford’s Montana stories—a far-off imaginary space (even if you are a tourist in it) where much is possible.

These stories will, I think, captivate any reader interested in how Richard Ford handles the longer short story form. Recommended.… (more)
1 more
LibraryThing member eheinlen
I very much enjoyed the author's writing style. It was very expressive and involving. The characters were well-developed and very interesting. The stories within this book are not quick reads, but if you have the time, you should enjoy them.
Fewer