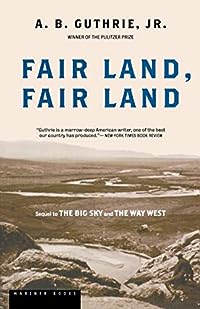 With his revered classics The Big Sky and The Way West, A. B. Guthrie, Jr., claimed his preeminent post as the father of the western epic. Fair Land, Fair Land, first published in 1982, marks the sequel to his two masterworks and rounds out a chronological gap, the mid-nineteenth century, in Guthrie's Big Sky series. Reappearing here is Dick Summers, of the earlier sagas, now a wizened conservationist who seeks retribution from his former compatriot Boone Caudill and renewed companionship with the self-reliant Teal Eye. Imbued with a rich sense for the impermanence of the idyllic plains, this tour de force offers a stirring commentary on a country's physical and spiritual erosion, as relevant today as it was a decade ago.

LibraryThing member dougwood57
In Fair Land, Fair Land, A.B. Guthrie wrapped up the Old West part of his 6 novel series of the West. Guthrie had originally skipped over the period from 1845 to 1870. He was later convinced in 1982 to go back and finish the tale of Dick Summers.

Guthrie places Summers in an extended autumn both of
Show More
his own life and that of the old Indian way of life.

But the idyll does come to an end. The game gradually gets harder and harder to find, whites intrude more closely, and finally the soldiers come to establish a fort. The book ends with the Marias River Massacre.

There's no way to make of this era a happy story and Guthrie doesn't try. A fine ending to the Dick Summers trilogy.
Show Less
1 more
LibraryThing member HaroldTitus
I've read all of A. B. Guthrie Jr.'s weatern series and enjoyed them all. "Fair Land, Fair Land" is not quite up to the quality of "The Big Sky" and "The Way West" but it is a must read for anyone that has read these earlier novels. Dick Summers is one of the most engaging characters I have come
Show More
across. Verbally succinct, decisive in action, Summers adheres to a moral code that makes him an exceptional human being in a harsh, frequently cruel environment.

This book had to be written for two reasons. One, readers of Guthrie's first two novels wanted to learn of the fates of Boone Caudill, Summers's dark-hearted protege in "The Big Sky," and Teal Eye, Caudill's abandoned squaw. Two, the novel fills a gap in the timeline of Guthrie's series of Western novels. It narrates skillfully the end of the mountain man era and the ascendency of frontier army control over the Rocky Mountain Indian population.